If you have ever mowed a lawn with a riding mower, you have thought about this. You have only to be honest enough to admit it. A lawn mower with Tool Time Tim Taylor power! Well, friend, Honda thought about it, as well. UK Honda recently set a new Guinness World Record by doing 0-100mph in 6.29 seconds with the Honda Mean Mower V2. A 100 mph LAWNMOWER!

It boggles the mind.

Yes, it does. Here is what Gildshire knows so far. You had better believe we enlisted the help of Jalopnik for this story because it is one that they will be atop from the get-go.

This landscaper’s daydream set the record May 6 of this year, on a test track just outside Dresden, Germany. Experienced stunt driver and racer, Jess Hawkins sat behind the wheel and held on for dear life! But, there’s more.

How can there possibly be more?

On a later run, the mower hit the astonishing top speed of 150 mph, though it took several minutes to achieve that mark.

One hundred fifty miles per hour. Is it a nuke?

No, it’s powered by the 999cc, 190-horse engine from the CBR1000RR Fireblade SP motorcycle. They got 90 mph in first gear and revved it to 13,000 RPMs to the finish line. Honda also used several other pieces from the Fireblade, including the clutch, six-speed transmission, and the LCD display. They moved the gearbox to the steering wheel for quick shift capabilities.

Four-stroke piston calipers are on the front and are supplemented by six-pots at the rear. The entire braking set-up is supplied by Kelgate. Goldspeed 10-inch wheels, wrapped in special-order Hoosier racing rubber. 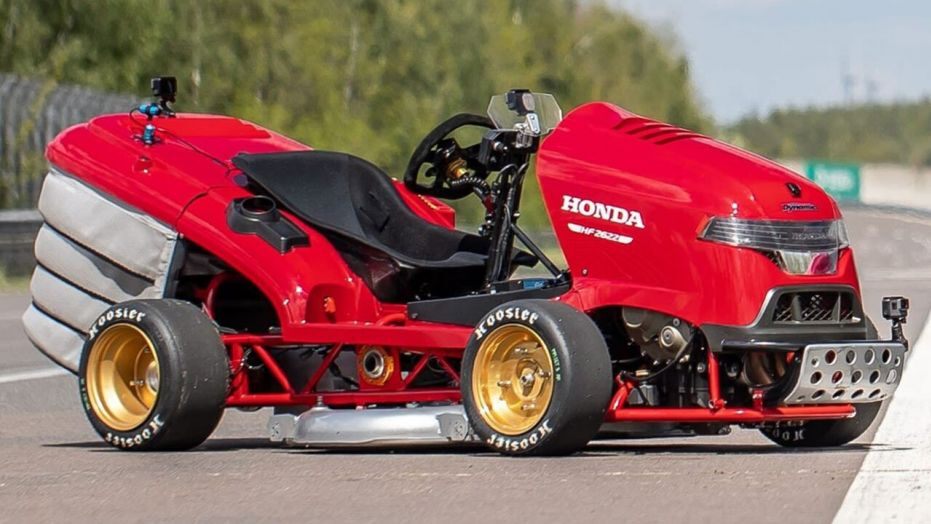 Just…wow. What does Honda have to say for itself?

“The original Mean Mower was an incredible machine, but this time we’ve taken it to a whole new level with version two. After taking the top speed record in 2014, we wanted to do something a little different by setting an all-new record for acceleration, and the result is fantastic. Team Dynamics have gone above and beyond in developing and building this real feat of engineering, and hats off to Jess for being brave enough to get behind the wheel!”

The original Mean Mower used a 996cc V-twin engine from the Honda VTR1000 and made 97 horses. It reached 116mph in 2014, before being beaten by the current version.

You did say this is a lawnmower.

Yes, and to qualify for the record, it had to prove that it could cut grass. Two electric motors drive carbon fiber blades, so you could technically use it for lawn and garden maintenance. You could prepare a football field for a game in a couple of minutes.

No, don’t be silly. This is for contest and demonstration purposes only. Honda (U.K) has set the mark with this 100+ mph lawnmower. It will be for another company to try and beat it.

Oh, John Deere? Are you listening?

What Can Be Better Than A Chocolate Cake

You’re Opening a Small Business, But Where?