There’s never been a time in movie history more in love with motion-capture. The technology has allowed filmmakers to bring non-human characters to life alongside real human beings. Motion-capture acting (or performance-capture acting) involves wearing skintight suits and special sensors that capture every movement and facial expression. It was first brought to audiences on a wide scale and in magnificent form by Andy Serkis in The Lord of the Rings and The Hobbit series. What’s it like to be a mocap actor?

For a long time, motion-capture acting was not appreciated. Studios didn’t even bother to ensure the safety of their mocap actors, who would be asked to perform physical stunts like falling unto concrete without any pads on their bodies or the floor. Once mocap became increasingly popular and it was clear this was where the movie industry was headed, studios finally began spending money to keep people safe.

Even after that, physical pain was just part of the game. The sensors on a mocap suit look like balls from a ball pit, and cover a person’s whole body. They used to be made of a really hard material that would actually leave purple bruises. As if that wasn’t enough, the cameras also weren’t good enough to pick up the sensors on actors’ faces, so they needed to do two performances: one from a distance for body movement, and another up-close for the face.

Some of those conditions have improved, and a lot of it is because big-name stars are participating in the mocap process. When the technology first started, mocap was scoffed at, and few considered it “real” acting. While you will see people like all the Marvel movie stars working in front of a green screen, a ton of their scenes are still performed by mocap actors. It’s the boring stuff – like breathing and walking around, that the background actors take care of. For video games, sometimes the stars will just record facial mocap along with their voices, while people whose names you’ll never know do all the physical stunts. 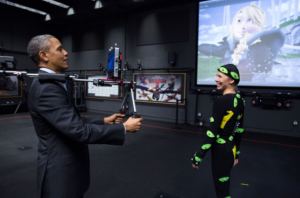 Those actors still need to have the acting chops though, and they almost need to be better, because mocap stops for no one. It’s not unusual for an actor to get through a week’s worth of scenes in just one day, complete with all the lines the star has and physical work. Unfortunately, these hard-working folk don’t get the dues they deserve. There are no acting awards for their performances, and they’re rarely even paid the same. The Screen Actors Guild continues to try to get better conditions and terms for mocap actors.

Becoming a motion-capture actor isn’t too different from breaking into the industry as an actor in general. You just have to know where to look, and be able to market yourself and what makes you unique. Look for casting calls on video games and movie projects using mocap. There are also courses you can take that teach you about the mental and physical challenges of the art. It shouldn’t be considered a “fallback” acting career, because as you read, it can be even more difficult than regular acting.

Andy Serkis has some of the best mocap performances besides Gollum, like Caesar from The Planet of the Apes series, but he’s not the only actor to cross over. There’s Zoe Zaldana in Avatar, Sharlto Copley in Chappie,  and Alan Tudyk in I, Robot.

If you’re interested in diving into mocap more, check out The MoCap Vaults, which was founded by Oliver Hollis-Leick, who has appeared as Iron Man and Master Chief, and director John Dower.

Self-Healing Rubber That Could Revolutionize Tires