How Scientists Harnessed A Sugar Molecule To Clean PFOA From Water

In the 1950’s, people wanted products that were easy to clean. Companies thought they had found the answer with Teflon non-stick coating, stain-resistant carpet, and waterproof textiles. However, they were using a toxic chemical known as PFOA, also known as C8. It has made its way into everything from cookware to fire-fighting foam to food packaging. When it’s present on cookware, it can be inhaled and has bee n linked to flu-like symptoms. Studies have shown it can cause cancer in animals, as well as a host of immune and endocrine system problems.

PFOA is dangerous for the environment, and there’s evidence that points to it being dangerous for humans, too. It’s easily absorbed orally, and sticks around in the liver and kidneys. It can stay in the body for up to 9 years, and is most likely playing a role in all kinds of diseases and health problems. Right now, there’s not a lot of data about how bad the effects are for humans.

Even if you don’t use household items with PFOA, it’s practically impossible to avoid. You can even be exposed to PFOA in dust. Studies have revealed that most people worldwide have a very low level of PFOA in their system, with that amount being higher for those who live near contaminated water and those who work in factories where it’s present. Once PFOA is in the water supply, it’s nearly impossible to remove and it does not break down. In 2015, a state of emergency was declared in two towns because their drinking water was so contaminated. The EPA has only just established health advisories for PFOA, and plans to continue its research into the effects. 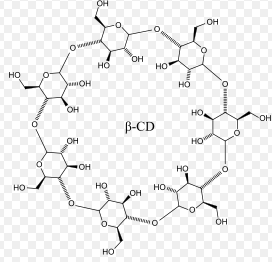 These rings act like nets that catch PFOA molecules

Removing PFOA has become easier over the years, but this year, scientists created a new filter that will make cleaning up the toxins way more efficient. The filter is made from beta-cyclodextrin. It’s a bio-renewable sugar that occurs naturally and comes from cornstarch. Scientists at Northwestern University transformed the sugar molecule into a polymer through a process called “cross-linking.” The cyclodextrin connects with another molecule, decafluorobiphenyl, or DFB. The DFB molecule attracts the toxin, and thanks to the ring-like structure of the cyclodextrin, the polymer is perfect for capturing and sticking to the toxins!

When researchers tested out the filter, they found it removed a whopping 95% of the PFOA from water. Compare that to the next filter – made from activated carbon – which only captures around 50%. The new polymer is also reusable after a bath in methanol and works in conditions that activated carbon filters can’t. As if those weren’t enough reasons to love this polymer, it can be “reprogrammed” for other toxins by switching out the cyclodextrin for another molecule. It’s like changing out a net to catch smaller or bigger fish.

As for preventing continued exposure to PFOA, there are several things you can. First of all, never buy anything cookware with non-stick. This includes Teflon, T-fal, and Calphalon. You can to go with stainless-steel and cast iron. There’s a bit more maintenance required, but it’s totally worth it. For fabrics on furniture, ask about if they were treated with water and stain-resistant chemicals. Stain treatments like Stainmaster and Gore-Tex also use PFOA. Since fast-food containers even contain PFOA, don’t hit up food in their original containers, since that will allow the chemical to seep into your dinner.

For information on how to filter PFOA from your drinking water at home, check out this thread on quora.

Stuck in the wilderness? Here are five ways to purify your water.

Self-Healing Rubber That Could Revolutionize Tires