For years, women struggled to be taken seriously in the writing world. Even now, female writers are often dismissed and critiqued more harshly than their male counterparts. This is sad, considering that women have been writing important texts all throughout history,  often breaking completely new ground for both women and men.

The earliest known female writer is an Akkadian/Sumerian poet named Enheduanna. She died around 2250 BCE, and is considered by many to be the first named writer period. Enheduanna was the daughter of Sargon the Great – one of the first empire builders – and served as a high priestess working to unite the Akkadian gods with the Sumerian ones. This was an extremely important job since to have a strong empire, Sargon needed a united religion. Enheduanna’s hymns and poems would go on to inspire writings from the Hebrew Bible, from Greece, and beyond.

The next achievement in writing came during the 11th-century from Japan. A noblewoman named Murasaki Shikibu composed a sprawling epic called “The Tale of Genji.” She would write the story chapter by chapter, and give it to her readers among women of the court. It’s considered the world’s first novel.

No doubt women continued writing through the centuries, but it wasn’t until the 14th-century that one wrote a published text in English. Julian of Norwich was an anchorite, which means she lived in isolation to be with God. She lived in one sealed room about 12 feet by 12 feet with three small windows. One let Julian receive her meals, the other looked into the church, and the last looked out into the yard. Her book, Revelations of Divine Love, chronicled sixteen visions she had over the course of her life. The book was published and Julian became so famous people would send her money.

One of her fans, Margery Kempe, left her former life as a mother of 14 to become a sort of wandering pilgrim. She traveled to places like Jerusalem, and dictated the story of her life to a scribe. Its existence was unknown until the 1930’s when it was discovered in a cupboard of an old country-house. This is the only hard copy and was digitized in 2014. 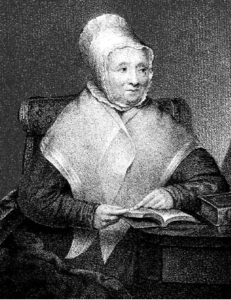 Following in the footsteps of Enheduanna, Anne Bradstreet and Hannah Adams took to poetry and religion. Anne married young at 16 and traveled to America in 1630. Despite a persistent illness that led to her death at 50, a book of her poetry was released in London and the colonies, making her the first published American poet. Hannah Adams published her first book over 100 years later. She went on to publish other books on topics like early US history and comparative religion. She never married and was the first US woman to earn her living as a writer.

These women paved the way for female writers today and should never be forgotten. Writers like J.K. Rowling, who became the first billionaire author in 2004, no doubt know that they owe a debt of gratitude to those who came before. If you are a reader and want to add more female authors to your list, consider Virginia Woolf, Toni Morrison, Margaret Atwood, Charlotte Bronte, and others. Even if it’s in a small way, they all follow in the footsteps of the first female writers.

There are countless books a person can read, but there are some that have been lost to history. Read about some of them here.

The Twisty Tale of Labyrinths And Mazes

America’s Best Main Streets (and a bite to eat)