With its front legs folded as if in prayer, the praying mantis is one of nature’s most intriguing creatures. In French folk tales, a praying mantis has the ability to lead a lost child back home, while in Arabic stories, the mantis always points toward Mecca. In certain African countries, the mantis’ power is even more impressive – legends say the insect can resurrect the dead.

There are 2,000 unique species of praying mantises in the world, and the best known fact about them is that the females decapitate and eat their mates during sex. However, this isn’t actually as common as one would think. In the wild, it happens about 5-30% of the time. It seems that the female will bite off her mate’s head simply because she’s hungry, though studies have shown that the females who eat their mates produce more eggs. 90% of the male’s nourishing amino acids were passed on to his female and eventually the eggs, while if he escaped cannibalization, he only passes on 25%. 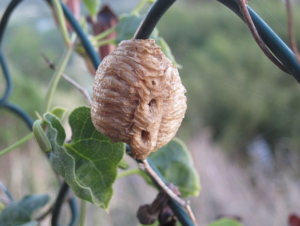 Once the female has mated, she can lay around 100-400 eggs in the fall. Her lifespan is about 6-12 months, so after she’s made sure her eggs are protected through the winter, she dies. The eggs are encased in a foam of protein. This will harden, protecting the eggs from the cold in a structure known as an ootheca. Mantises will lay these sacs on twigs and stems, but they’ve also shown up on fences and walls. In the spring, the nymphs hatch. More often than that, these newborns immediately eat their weaker siblings. Many gardeners will separate the nymphs right away, housing them in vials with a moist cotton ball. Instead of a brother or sister, they are fed with aphids and fruit flies.

The praying mantis’ diet isn’t limited to their own lovers or siblings. They eat pretty much anything they can catch, including other insects, frogs, rodents, and even birds. Mantises can grow up to 4 inches, which is large enough to catch hummingbirds. Mantises have been observed dangling the bird from feeders, and chewing through the skull to eat the brains. Other unfortunate bird victims include warblers, honeyeaters, and European robins. The largest species of mantis, the 4-inch Chinese mantis, eat the most birds. The females seem to be the ones who are best at bird-catching.

What makes mantises so good at hunting? Their bodies see m uniquely designed for it. They are the only insect who can turn their heads from one side to the other in an 180-degree angle. They have excellent eyesight that lets them see 60 feet away, and during a hilarious experiment where scientists outfitted the insect with tiny 3-D glasses, and put them in front of a screen playing images. When the mantis watched 2D images, they didn’t react, but once they wore glasses and saw something in 3D, they would attempt to lunge. This experiment proved that mantises can see in 3D. Mantises are also fantastic jumpers capable of adjusting their spin in midair.

If the praying mantis sounds like a creature from a horror movie, they do offer some benefits for humans. Thanks to their voracious appetites, they will eat garden pests and help maintain healthy plants in a garden. However, since praying mantises don’t have a preference about what bugs they eat, they will also eat beneficial bugs like honeybees and ladybugs. Keep that mind before you unleash one in your garden. 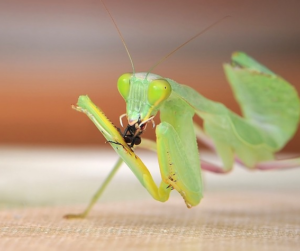 A praying mantis enjoying a fly

Bugs eat other bugs, but have you ever eaten a bug? While praying mantises aren’t on the menu, other bugs are. Click here to see which ones.