Home » Uncategorized » Are You Brave Enough To Enter Room 17 or McKamey Manor?

Halloween is soon, and for a lot of people, that means visiting a haunted house attraction. There are lots to choose from, but if you’re in the Fullerton, California area, Room 17 offers intense scares and top-notch design. The house is so over the top, you must be at least 16 to enter, and you must sign a waiver.

The house began in 2015, and was then located in Tustin. Known as “Gluttire,” the house was set in a made-up medical college where guests follow the story of Paula, a first-year student with a rough history of suicide attempts and drugs. You are locked in 17 rooms for 90 seconds, with actors dressed as a variety of terrifying characters. Unlike most haunted houses, these actors are allowed to touch you. And they will. They might even pet your hair or lick you. Every sense is bombarded with gross smells, sounds, extreme temperatures changes, and more. If it gets to be too much, the safe word is “Mercy.” 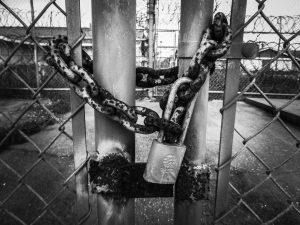 This year’s Room 17 story is set in a prison

The creators of Room 17, a married couple, didn’t have experience in the haunted-house business, but they shared a love of makeup, production design, and of course, Halloween. They set up the house as a story, so all the rooms felt connected. While Room 17’s first incarnation featured Paula as a student at the horrifying Glutirre University, this first year at Tustin has the plot changed to “Perpetuum Penitentiary,” where Paula is sent after committing a “heinous’ crime. Of course, the prison is populated with an evil warden and over 130 horrifying prisoners and guards.

The waiver is in place to warn visitors about strong smells and being touched, but there’s also depictions of bulimia, gun violence, and sexual assault. While the thought disturbs a lot of people, those who have gone through the house say the acting is dramatic and cheesy enough to take away the triggering effect. The idea of a waiver seems to actually encourage people to come – Room 17 gets about 800 guests a night.

Another haunted house attraction in California – McKamey Manor – truly crosses the line, so we can’t recommend it. There’s also a waiver, and while Room 17’s is more about giving guests a head’s up, the Manor’s is most likely to protect the creators from being sued. Visitors will be physically attacked, tattooed, get their heads shaved, and forced to eat rotten food or even their own vomit. There’s no safe word, and no time limits; the “fun” can last up to 8 hours. The Manor has been operating year-round for 10 years and doesn’t make any money – guests get in by handing over dog food. 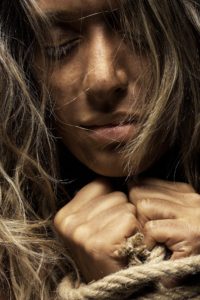 At McKamey Manor, they will straight up torture you

The house is so controversial, there’s a community that criticizes them and warns off would-be visitors. It didn’t seem to be successful, considering the Manor has a waiting list over 24,000 long. There are now two new locations in Alabama and Tennessee. According to their website, in order to reach the “big show,” you first have to spend 4-5 hours in “Holly’s Playhouse.” There’s also a list of requirements, including a doctor’s note that states you are mentally and physically fit to participate, and proof that you have medical insurance.

If you are curious about McKamey Manor, but would never go through it, there’s a documentary about haunted houses called “Haunters: The Art of the Scare.” You can also watch videos of tours on the Manor Youtube page.

Too scared to try haunted houses? Pumpkin-carving is a much more relaxing autumn tradition. Read about it here.