2017-18 NCAA College Football: Four Teams that should be in the Playoffs

The 2017-18 NCAA College Football schedule is heating up as another action packed weekend provides the playoff committee with some key wins/losses to consider. We expect to see the Alabama Crimson Tide take over the top spot after the Georgia Bulldogs were stomped 40-17 to the Auburn Tigers on Saturday.

While the Crimson Tide continued their regular season dominance with their 10th win of the season over a solid Mississippi State, the win just ensured their showdown with the Tigers will go a long way in deciding which of these three SEC teams will make the 2017-18 NCAA Football Playoffs. Meanwhile, the debate could be made for all three of these teams to secure spots this year as all have had impressive seasons.

In the end, only one of these teams will make it along with only three other teams around the country. This should not only bring up debate locally but nationally as the current four team NCAA Football playoff structure needs to be fixed. Could this be adding two teams or four teams or even eight teams? Right now, all of those situations could be debated but one thing is for sure and that is the playoffs need to be fixed.

With that said, let’s take a look at the four teams that should be in the playoffs if they started next weekend.

The debate can be made that this isn’t the best Nick Saban Crimson Tide team but the end result is still a team that sits at 10-0 overall while picking up wins in all seven of their SEC matchups. Along the way they knocked out the Florida State Seminoles to start the season including their starting quarterback before picking up impressive wins over LSU and Mississippi State. While they have a weak matchup next weekend, the following week won’t be an easy task as they take on the 6th ranked Auburn Tigers. 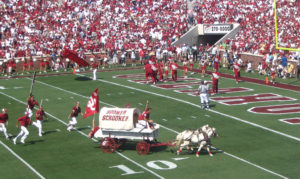 Not only could the Sooners’ Baker Mayfield take home the Heisman Award but he could have a shot at bringing home a National Championship as well. Outside of a difficult loss to Iowa State, this Sooners team has the resume to carry them into the playoff picture. The Sooners dominated Ohio State early in the season before picking up big wins over Oklahoma State and TCU. The finishing stretch for this team is a game against Kansas before a potential shoot out against West Virginia. Look for the Sooners to be one of the last four standing come the playoffs.

While going undefeated for some people might be a reason for putting a team in the playoffs but it shouldn’t be any guarantee. Luckily for the Hurricanes their recent wins over two teams ranked in the top 15, they get one of our four nods. The most recent of those wins came this past weekend when they blew out a Notre Dame team that was ranked number 3 in the country. For this team, they have two very winnable games over the next two weeks before a key showdown on December 2nd against a very good Clemson Tigers team. A loss in any of those games and the Hurricanes will not have any shot at landing a spot in the playoffs. 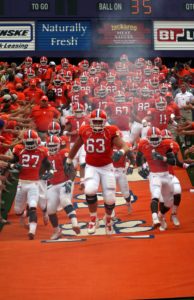 The argument for undefeated teams could be made for Wisconsin to take home the fourth spot, but we just don’t see how you can put them in over the Tigers who have a better resume. The Tigers knocked off Auburn for their second win of the season before picking up wins against a Louisville Cardinals team ranked 14th, a Virginia Tech team ranked 12th and a North Carolina State team ranked 20th. The test will be difficult down the stretch with a win over a difficult South Carolina team before a playoff showdown with the Hurricanes on December 2nd.

Now, here is what a real playoff situation would look like if it was left up to us!

Each of the five major conferences are represented as well as one non-major school would be guaranteed a spot. The other four spots would go to teams based on RPI ratings, wins over top ranked schools and impressive win points.

For now though we will all have to settle with the four team playoffs that will kick off later this year!