Home » Uncategorized » The Strangest and Most Famous Fictional Religions

*may contain mild spoilers for Beneath the Planet of the Apes, “Children of the Corn,” Dune, and “The Shadow over Innsmouth”

Religions influence every area of society, whether we like it or not. Fictional religions are often just as significant. Here are some of the best-known:

Most people are familiar with the original Planet of the Apes and its more recent prequels, but the original also has sequels that explain why Earth has changed so much. A nuclear war wiped out most of the humans, leaving only intelligent apes and a few human mutants, who also happen to be psychic. This cult lives beneath St. Patrick’s Cathedral in New York City, and worship a mysterious deity called “the Divine Bomb.” It’s eventually revealed that this god is the last atomic bomb, and that the cult has been keeping it safe while they await the perfect time to trigger the end of the world. 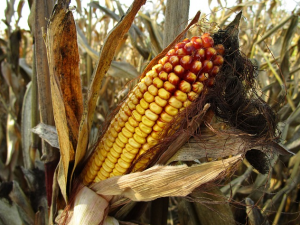 He Who Walks Between The Rows

In Stephen King’s story “Children of the Corn,” the main antagonist and mysterious god is called “He Who Walks Between The Rows.” In the story and movie, a child named Isaac says he has heard from a god, and that the children must kill all the adults to “learn a truth.” His right-hand man, a teenager named Malachi, is the muscle. With all the adults gone, the children are fully emerged in the cult and once they turn 19, they are sacrificed. At first, there’s some doubt about whether the blood-thirsty god is real, but in both the story and movie, it’s revealed that He Who Walks Between the Rows is very much in control. 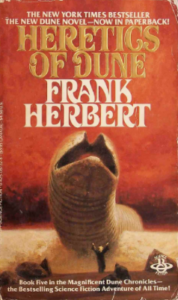 The religions in Dune

Frank Herbert’s sci-fi epic Dune has quite a few religions, with most of them appearing to be a mix of existing beliefs, like Buddhism and Islam. One of the best-known belief systems that is featured in the 1984 movie is that of the Fremen. They are represented by Paul Atreides, a man who can call upon the rain, control sandworms, and receives prophetic dreams. He becomes known as “Muad’Dib,” and becomes emperor and figurehead of the new religion. He wages a “holy war” which kills 60 billion people, all in the name of the greater good. Paul struggles with his calling, and much philosophizing occurs over the book series. Herbert took great care in building a realistic religion that was both familiar and unfamiliar to the reader. George Lucas especially credits Dune with inspiring the Order of the Jedi and their mysticism.

The religion in The Handmaid’s Tale looks a lot like puritanical New England and the era of the witch trials, and that was intentional. Author Margaret Atwood combined the unrelenting control of past Christianity with what she saw in the 1980’s, with President Reagan and the Moral Majority. What would the world look like if the brutality of the Puritans seeped into the televangelist era? The Gilead cult murdered all the members of the government and took over, blaming outside terrorist forces. They gradually broke down the rule of law, making opposition illegal, executing rebels, and forcing women to be docile. Offred, the main character, serves as a Handmaid to the infertile wife of a top government official. In a twisted version of the Biblical Rachel and Leah story, where Rachel had a servant conceive and bear children for her, Offred must engage in a disturbing sexual ritual every month. 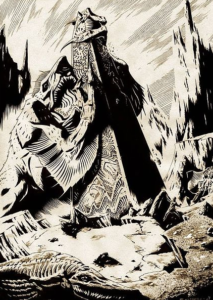 Dagon, one of the Deep Ones

Arguably the most influential fictional religion in pop culture is the cult of Cthulhu. Created by H.P. Lovecraft, the most famous variation of the religion is found in Innsmouth, Massachusetts. Detailed in the short story, “The Shadow over Innsmouth,” a young man discovers a strange village where the people have fish-like qualities. He learns that many years before, a fisherman discovered sea-dwelling creatures called “the Deep Ones.” In exchange for human sacrifice, the Deep Ones gave the townspeople fish and jewelry, calling themselves the Esoteric Order of Dagon. After many years, the Deep Ones emerged from the sea and slaughtered half the town. The creatures forced the survivors to breed with them, producing the fish-like humans that populate the town. Eventually, the human hybrids would transform into Deep Ones, and go underwater to live forever. While Cthulhu, the most famous of the cosmic deities in Lovecraft’s mythology, is just mentioned in passing, his ominous existence is ever-present.

The Druze and Zoroastrianism religions are real, and extremely tiny.