The holidays are a time when fine wine is enjoyed. For years, France produced the best wine. When settlers traveled to North America, they brought French vines with them. However, the grapes were not match for the local pests, and the vineyards failed. Determined to have wine, grape-growers began experimenting. After learning that local grape vines had adapted resistance to disease and pests, the growers grafted French vines to American roots, creating a hybrid. American wine was a success!

In the 1800’s, France began importing American vines to try in their vineyards. A tiny insect made its way across the sea with these vines: the phylloxera. These bugs are similar to aphids, though they are almost invisible to the naked eye. They feed on grapevine leaves and roots, causing root deformations and fungal infections that cut off nutrients from the plant. When the phylloxera found itself in France, it began chewing away, taking down entire vineyards. The French were horrified. Their wine industry was on the peak of destruction. 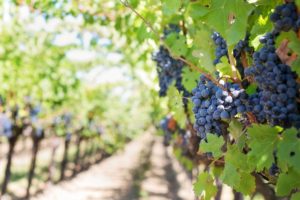 It took time to figure out the problem. Scientists eventually found the phylloxera, but they were confused as to why the bug was only found on healthy vines, and not the dying ones. Because science didn’t understand what we do know about bugs, a lot of people believed the French vines were already flawed, and the bugs were just a coincidence or side effect. It didn’t help that the wine blight had begun in southern France, which was looked down on by wine snobs who preferred northern French wine. However, a pharmacist named Jules-Emile Plancho was certain the tiny insect was the source of the problem, and kept investigating.

Plancho published a description of the bug, and drew attention to its similarity with the American phylloxera. An American entomologist read the publication, and said that yes, it did appear the bugs were the same. However, in America, phylloxera eat on the leaves, not the roots. Thanks to the two men, it became clear that the phylloxera had grown fond of the roots of French grapevines, and that’s why there was a discrepancy.

The problem identified, now France needed a solution. The government offered 300,000 francs to anyone who could kill the bugs, but by 1890, none had been found. Instead, scientists shifted focus to creating a hybrid, similar to what the Americans had done. A grape-grower (known officially as a “viticulturist”) adopted the technique and grafted French vines to American roots. When he tried to collect his reward, which would equal about $5 million dollars today, the government refused. “You didn’t develop a cure,” they said. This seems unfair, considering France’s wine industry had been saved. 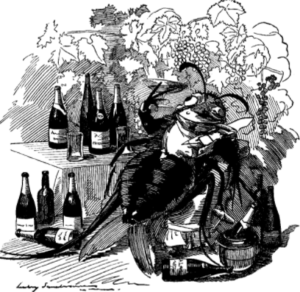 Just about every wine you get from France is not truly French, because it’s an American-French hybrid. There are a few vines that survived the blight, including one that makes a port called Nacional. Until 2005, a Pinot noir that survived produced one of the world’s rarest (and most expensive) Champagnes, but one of the three parcels used was hit by blight. No one knows why certain tiny plots of vines survive.

During the nearly century-long fight against phylloxera in France, over 70% of the vines died. Thousands of grape-growers went bankrupt. In the 1870’s, Queensland in Australia became infected, and knowing how devastating the blight would be, the government made it illegal to transport any vines or equipment. Western Australia and Tasmania have been spared. There is still no cure for grape phylloxera. The only solution is grafting.

The Colorado potato bug is another destructive bug, and was used as propaganda tool during the Cold War.