Known for his powers of manipulation, charisma, and role in the downfall of the Russian monarchy, Rasputin is one of history’s most infamous figures. His daughter Maria, though less well-known, also lived a highly-unusual life. She was the daughter of the most powerful man in Russia, a lion-tamer, and all throughout her life, Rasputin’s sole defender. 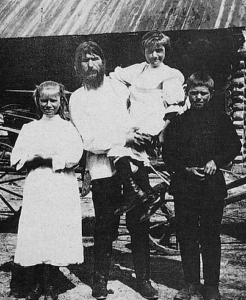 Rasputin w/ his three children (Maria is on the left)

In St. Petersburg, the young prince Alexei suffered a hemorrhage, which for a hemophiliac, could be fatal. Rasputin gave advice through a telegram to the Empress, and when the bleeding stopped, she became convinced Rasputin had special powers. She immediately arranged for Rasputin and his daughters to live in the capital. Rasputin’s wife stayed behind with her son, having no love for the city. A servant (and most likely one of Rasputin’s many mistresses) cared for the girls. For a while, life was good, and according to the diary she began at 15 years old, Maria received a good education and became close with the princesses. When Rasputin was assassinated, Maria and her sister Varvara fled back to their mother’s.

Despite diary entries that express annoyance with all the prayers her father required, Maria did end up marrying the man Rasputin  picked out for her. In 1917, she married Boris Soloviev, a family friend who had similar beliefs to the deceased Rasputin. For years, the couple wandered through Europe, their homeland wracked by war. They eventually ended up in Paris. In 1926, Boris died, leaving Maria on her own. She worked as a cabaret dancer, and then as a circus performer, which led to her traveling to America with the Ringling Brothers Circus, where she was billed as “daughter of the Mad Monk.” 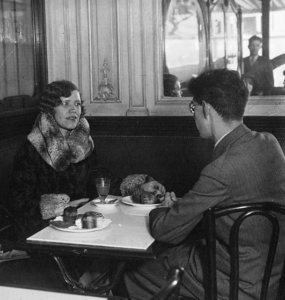 In 1935, Maria was mauled by a bear in the circus, and quit. After a snafu with immigration, she became a citizen in 1946, the same year she divorced her second husband. Not one to shirk off hard work, Maria took a job as a machinist in a shipyard, and kept working in defense plants until 1955. To make ends meet, she gave Russian lessons, looked after kids, worked in hospitals, and told her story to journalists willing to pay.

Maria never stopped supporting her father. She wrote three books about him, and tried to sue one of his killers after the man published a memoir. When she worked as a cabaret dancer, the scene was always about her father’s life and death, so she would have to face impersonators and actors playing him and his murderers. In her diary, she would write that she would weep every time.

The Man Behind the Myth, published in 1977, served as a final defense of Rasputin, portraying him as a kind, generous man, and not the alcoholic, womanizing manipulator the world knew. From what historians gather from other sources, Rasputin was certainly not the man Maria knew, but he also wasn’t what most people picture now: Christopher Lloyd as Rasputin in the animated Anastasia.

Scientists Marie and Pierre Curie also had a daughter who became famous in her own right: Irene.