The Muddled Origins of Valentine’s Day

On February 14th, lovers celebrate Valentine’s Day. Most of us have gone through the usual traditions, like exchanging cards and giving flowers, but have you ever wondered where all this came from? The origins of Valentine’s Day go back thousands of years, and would make fans of the The Fifty Shades series blush. The Romans celebrated Lupercalia during February. A goat dog were sacrificed and skinned, and then their hides were used to whip the women present. Women would also stand in a line for men to slap them. The violence was believed to make the women fertile. At the apex of the festival, men would draw girls’ names from a jar, and they would be paired up for the year. Alcohol poured freely.

Christians take over the day of love 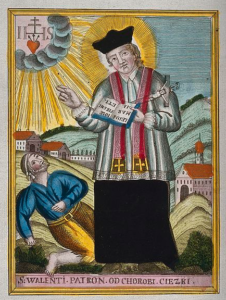 One of the many St. Valentines

When Christianity became institutionalized, leaders tried to cover up the pagan rituals, much like with Christmas. The name “Valentine’s Day” comes from a legend about a priest marrying Christian couples against Roman law, but there are actually several St. Valentines. One story tells of how Claudius II, known as Claudius the Cruel, imprisoned Valentine and tried to convert him to paganism. Valentine refused, and was executed. Another story involving Claudius and a priest named Valentine relates that Valentine performed secret marriages after Claudius made it illegal, believing that married men weren’t good soldiers. When he got caught, Valentine made friends with a jailer’s daughter and sent her a note signed, “From your Valentine.” In some versions of the story, Valentine actually fell in love with the girl.

All these different Valentines came together in the Christian version of a day of renewal and springtime; it took centuries before it became a day for couples. Geoffrey Chaucer wrote one of the first poems to connect Valentine’s Day for romantic couples: “For this was on St. Valentine’s Day, when every bird cometh there to choose his mate.” Shakespeare continued this tradition, and Valentine’s Day became the day to send cards and gifts to loved ones. Postage stamps became very expensive, but even then, people continued to mail cards. In 1835, 60,000 cards were sent. In 1940, when postage went down after reform, that number skyrocketed. 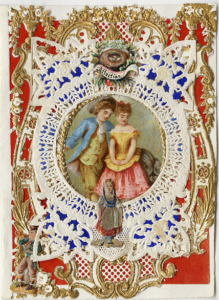 Valentine’s Day didn’t become “official” in America until 1847. Esther Howland, affectionately known as the “Mother of the American Valentine,” imported lace and paper from England. She is credited with innovations such as a card that opens up. In 1913, Hallmark released its first Valentine’s Day card. Since then, around 131 million cards are sold every year, with women purchasing around 80% of that number.

Americans spend more and more on Valentine’s Day every year. In 2016, spending hit $19.7 billion. That pressure has led to a cynicism about the holiday, which many believe to be invented by big corporations like Hallmark. There’s also a backlash about the emphasis on romantic love. What are single people to do? NBC’s “Parks and Recreation” created “Galentine’s Day,” which takes place on February 13th. It’s for women to celebrate their female friends. Interestingly enough, NPR mentions an ancient holiday called “Galantin’s Day,” which supposedly translates as “lover of women.” Further research couldn’t confirm this, but Leslie Knope’s Galentine’s Day has become a popular event.

Valentine’s Day dates back thousands of years, while “Black Friday” is relatively new. What’s the story behind the biggest shopping day of the year?