Everyone knows the Jell-O name, but do you know what’s actually in it? It’s flavored gelatin, which is made from the connective tissue of animals. Gelatin is also an essential ingredient in marshmallows and gummy bears. The dessert can be bought in stores ready to eat or in powdered form. During the summer, a Jell-O mold made with fruit and topped with whipped cream is not an uncommon sight. While it may seem like the essence of modern cooking – it looks like plastic – the jiggly dessert actually has origins that go back centuries.

During the Dark Ages, people had no refrigeration, so food spoiled very quickly. The first gelatin dishes were intended to delay spoilage as long as possible. They were also a sign of wealth, because boiling animal hooves to make the gelatin required many hours of work. Serving something in jello showed guests that the host employed a kitchen staff with time to spare.

Because Catholics couldn’t eat meat on Fridays, cooks figured out how to make gelatin from fish bladders. By the end of the Middle Ages, sweet jellies finally appeared, and were made from pectin, which is found in fruit. 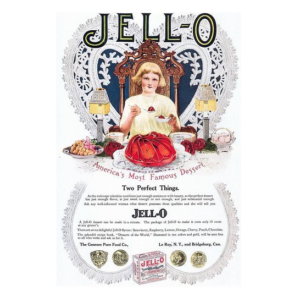 For years, people continued to make jelly through the long, hot boiling process. In 1887, cough-syrup businessman Pearl Waits decided to go into food, and came up with a mix of gelatin that only required hot water. It didn’t taste very good, so at his wife’s suggestion, he added sugar and food coloring. The final mix was 88% sugar, and came in flavors like strawberry, lemon, and orange.

Not knowing how to market the idea and more interested in other projects, Pearl Waits sold the formula,

patent, and name his wife had come up with – Jell-O – to the owner of the Genesee Food Company. After struggling with sales, Orator Francis Woodward began an aggressive and groundbreaking advertising campaign for Jello-O, which involved selling recipe books, handing out samples to Ellis Island immigrants, and putting out one of the first radio ads. Sales skyrocketed.

Return of the aspic

Gelatin was originally a savory food item, and that trend didn’t stop once people figured out how to make it sweet. In the late 18th century, Europeans began serving “aspics,” which is a clear jelly mold packed with ingredients like meat and vegetables. The aspic, made from jellied meat stock, gives food a shiny glaze, so rich hosts would serve aspics as glistening meal centerpieces. 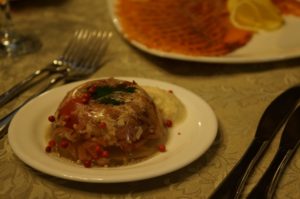 When the Jell-O brand became big, aspics made a big comeback. You can find old cookbooks, especially from the 1950’s, that involve putting pretty much everything into Jell-O. The reason is most likely because refrigeration was relatively new, and people were so fascinated with the ability to make Jell-O (which requires refrigeration) that they were experimenting with reckless abandon. People who lived through the Great Depression were also used to using everything, and Jell-O could stretch out food. My own grandmother used to serve a dish that consisted of lime-flavored Jell-O with cabbage and shredded carrots inside, topped with a dollop of Miracle Whip and walnuts.

Weird flavors from the past

The first fruity Jell-O flavors are still around, but many have been discontinued. Coffee and chocolate are popular flavors, but not in Jell-O form, apparently. Perhaps inspired by aspics, Jell-O also released tomato, celery, and an “Italian Salad” flavor, which took notes from dressing and pasta. Gross as those are, the oddest is probably “Plain.” Maybe they thought people wanted to add their own flavors?

Gelatin is a sneaky ingredient that many vegans have to be on the lookout for. Eggs are another concern, so a group came up with using chickpea liquid as a substitute. Click here to learn how.

How to Make the Most of Spaghetti Squash