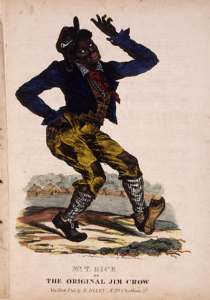 In the 19th-century, black Americans had trouble finding work in the entertainment business. It wasn’t as if work was easy to find elsewhere, but show business was especially tricky thanks to the popularity of “minstrel shows.” Created in 1828 by a white man named Thomas Dartmouth “Daddy” Rice, a minstrel performer painted their face black, with exaggerated lips, and parodied black stereotypes to the extreme. Rice’s character was even named “Jim Crow,” a trickster similar to Briar Rabbit in slave culture. How could an actual black person fit into this world?

Bert Williams was born in the Bahamas in 1874 and emigrated to Florida at age 11. Very intelligent, he had dreams of going to Stanford, but the tuition was too high. Once accepted to the University of San Francisco, Williams wrote songs and performed impressions to earn extra money. He met another aspiring performer, George Walker, and they joined force. For two years, they polished their craft in San Francisco, Chicago, and New York.

At first, Walker and Williams didn’t perform in blackface. Walker already had dark skin, while Williams was fairer. However, one night in Detroit, they decided to adjust while hoping to gain a permanent spot on the vaudeville circuit. Williams, who usually acted as the straight man, darkened his face. He played the clown to uproarious applause. 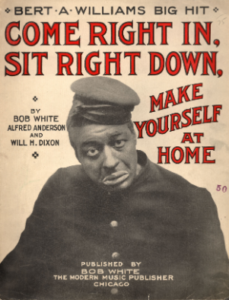 It wasn’t unusual for black performers to put on blackface makeup. In fact, it was the standard. Audiences were accustomed to the exaggerated features and midnight-black makeup; they weren’t interested in seeing a reflection of reality. Williams and Walkers often billed themselves as “The Two Real Coons,” but their performances appealed to both white and black audiences. Instead of resorting to the usual black stereotypes, the duo told stories that could be universally-applied.

Acting for both white and black fans paid off. In 1901, Bert Williams became the first African-American, best-selling recording artist. In 1902, Williams and Walker appeared in “In Dahomey,” the first black musical on Broadway. Four years later, Walker became ill, and in 1909, he retired. Williams continued to split payments with him until his friend’s death in 1911. As for Williams, he hit another milestone in 1910 when he received top billing alongside white performers in “The Ziegfeld Follies,” a Broadway revue.

Williams continued his climb to stardom. He became the first African-American accepted into a prestigious guild for professionals actors, while his song “Nobody” became his signature. It has since been covered by Bing Crosby, Nina Simone, and Johnny Cash. Williams performed into the 1920’s, commenting on Prohibition and other current issues. In 1922, he contracted pneumonia, which worsened an existing heart condition. On March 4, he died at only 47. 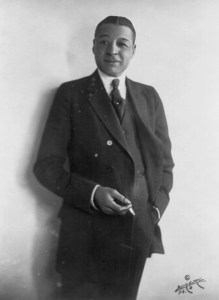 Despite his huge success, Williams faced oppression because of his race. While he was earning $6,500 a week at the Follies, he entered a bar and asked for a bourbon. The bartender, a white man, said he would have to pay $50. Unfazed, Williams pulled out a $500 bill and asked for ten drinks. In Williams words, the incident wasn’t “really that funny…I can play before the crown heads of Europe, but I can’t even get a drink in my neighborhood pub.” W.C. Fields, who worked with Williams, described him as the funniest man he knew, but also the saddest.

Now, most people don’t recognize the name Bert Williams. However, he broke barriers at a time when racism permeated every level of society. Even in blackface and playing the stereotypical character white audiences expected, Williams kept his head high and made waves that inspired black performers after him.

The Jim Crow laws made life challenging and dangerous for black Americans. Victor H. Green did his best to help by writing a book for road-trippers.