We’re familiar with the idea of a travel guide magazine complete with glossy photos and listings of restaurants and activities. In the mid 1800’s, however, the Western United States was strange territory. Lansford Warren Hastings, a lawyer by trade, wanted to snatch California from Mexico and establish a Republic. While writing about how great California was and misrepresenting the way there, he played an almost mythic role in the tragedy of the Donner Party. 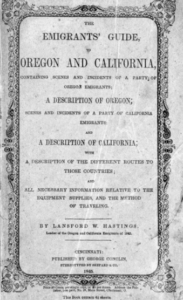 The cover of the Hastings travel guide

Born in Ohio, Hastings studied law and at 23-years old, joined a party traveling to Oregon. He loved the rough-and-ready lifestyle. His natural leadership paid off when the original leader – a doctor – killed some of the group’s dogs when they barked too much. Hastings took over. He almost died when the party reached Independence Rock, and everyone paused to scratch their names in it. Hastings and a friend wanted their signatures to be good, and they took so long that the wagons left without them. Some Native Americans surprised the two men and attacked them. Instead of killing them, they decided to hold Hastings and his companion for ransom. They were eventually released when Thomas Fitzpatrick, a member of Hastings’ group and a legendary pioneer, traded some goods for their freedom.

When they reached Oregon, Hastings quickly made himself useful planning Oregon City, which would become the first American town on the Pacific coast. He then moved to northern California and began working in land development. His job? Attracting emigrants to the territory. During the winter of 1843, Hastings wrote The Emigrants Guide to Oregon and California. In the book he lay out a “cutoff” intended to shave time off the journey to northern California. He hoped that a surge of Americans would overwhelm the Mexican population, and California would be taken without open conflict. 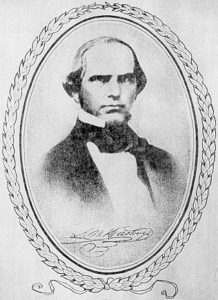 The shortcut to California appealed to one man in particular: George Donner. However, Hastings had failed to mention he hadn’t actually traveled the route when he described it, so he didn’t add in the particulars of the path such as the difficult mountains and wide salt desert. When he did test out “Hastings Cutoff,” it was with only men on horseback. They moved much quicker than families with covered wagons and oxen.

In 1846, Hastings agreed to take the Donner party through an alternate route discovered by a military officer. However, the Donner Party was late. While the lawyer guided another group safely into California, the Donners became trapped by snow in the Sierra Nevada mountains. By the time they were rescued, many had died, while the other survived by eating their bodies. Though he had played a relatively small role in the tragedy, people and the press villainized Hastings.

Hastings’ plans for an independent Republic didn’t end when the United States obtained California in 1848. In 1864, he met with Jefferson Davis, then the president of the Confederacy. Despite being Northern-born, Hastings was willing to work with the South in the hopes of annexing the best parts of California and Arizona into the Confederacy. However, the war ended, so he went to Brazil to obtain land for Southerners upset about losing the war. He wrote another book – The Emigrants Guide to Brazil – and guided a group to the new “Confederados” in 1867. However, while taking another ship, he came down with fever. Hastings died in 1870.

Lansford Hastings lived a strange life driven by a need to be important and be remembered. Whether it was scratching his name on a rock or trying to establish a nation from the tatters of the Confederacy, Hastings wanted to start something new. Unfortunately for him, he is best remembered for his role in the Donner party tragedy, where painted as his best, he was incompetent, and at his worst, criminally-untrustworthy.