Lasers are everywhere. They scan barcodes at the grocery store, they play DVDs, and cut clothes in factories. If you keep up with the latest technology news, odds are some stories involve lasers. But what are they exactly?

To truly understand lasers, there are other concepts you should learn about first. However, we don’t want to get into all that for this article, so let’s really simplify it: lasers are beams of light fed by “excited” electrons shaking really fast. Lasers can be visible, in the form of an x-ray, an infrared light, or an ultraviolet light. It isn’t like the light from a flashlight. There are three features that make laser light unique:

#1: Laser light is monochromatic, which means it has just one wavelength and one color. The amount of energy generated by the electrons determines what the wavelength is.

#2: Laser light is coherent. While the photos in a flashlight beam are jumbled and random, like a crowd of people, a laser light is an organized flash mob. 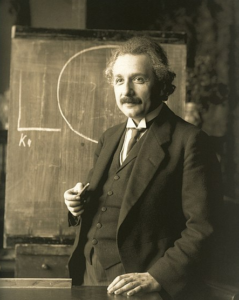 Max Planck came up with the general concept of lasers way back in 1900 with his theory that energy could be sent out or absorbed in chunks. Five years later, Albert Einstein proposed that light works the same way. In 1917, Einstein expanded on his theory, saying that by stimulating electrons, light could be made to emit a specific wavelength. Like many of Einstein’s ideas, this wouldn’t be proven for decades.

In 1954, a group of scientists developed the MASER, which used microwaves instead of light waves. Two of the scientists – Arthur Schawlow and Charles Townes – decided to try and make infrared masers. In 1957, they built an “optical maser” which was as close as anyone had gotten to making a real laser. Other researchers created similar inventions around the same time, and it was Gordon Gould, a graduate student, who actually used the term “laser,” which stands for “Light Amplification by Stimulated Emission of Radiation.” Gould filed for a laser patent in 1959, but was denied. Schawlow and Townes got the patent instead, setting off a competition between the men. Gould would go on to win 48 patents for other aspects of lasers.

The first working laser appeared in 1960. Theodore Maiman created it by setting up an energy source to excite the electrons in a synthetic ruby and boost the light intensity. He then put a reflecting silver mirror on one end, and a partially-reflecting mirror on the other. The photons of light bounced back and forth, increasing in intensity, and breaking through the partial mirror in a single beam of light. The first laser was born. 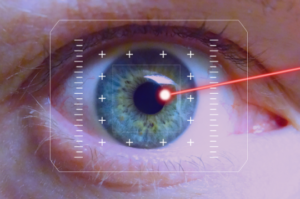 The first widely-available form of the laser arrived in the form of the laser printer in 1971 and then the barcode scanner in 1974. Since then, lasers are used in just about every imaginable way. In clothing factories, lasers cut extremely quickly and accurately. Doctors use lasers to remove tumors, cauterize blood vessels, and perform eye surgery. Lasers can even cut through diamonds, the hardest substance on earth. For DVDs and CDs, lasers bounce off discs, sending the pattern of numbers to a computer chip, which then converts the numbers into picture and sound.

The future of lasers

In February of 2018, physicists managed to stop electrons traveling near the speed of light. How? They shot them with a laser beam one quadrillion times brighter than the sun itself. This is just one example of how far laser research has come. Could we have laser guns some day? Use the lasers to power spaceships further than we ever thought possible?

Lasers were once purely hypothetical, and now they’re everywhere. Quantum computers were once a fairy tale, too, but in the latest technology news, they’re closer to becoming widely available.