written by Emmaline Soken-Huberty May 1, 2021

Imagine entering a yoga class and instead of the usual mats on a shiny floor, you find yourself standing on six inches of Himalayan salt. Rock salt bricks line the walls and salt crystal lamps light the shadows. When you breathe in, you inhale pure, aerated salt flowing through a ventilator. What is this place? Ellen Patrick taught yoga for 35 years and then developed Salty Yoga, which combines the established benefits of yoga with salt therapy. She believes exposure to pure salt and salty air can balance out the heart chakra and help with respiratory problems. 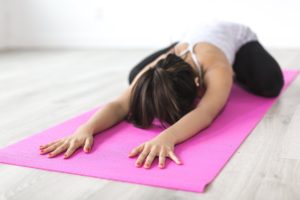 The history of salt therapy

Salty Yoga might be relatively new, but salt therapy – known officially as halotherapy – is ancient. The earliest record comes from Poland in the 12th century and describes how people would bathe in mineral waters. Healers would also prescribe breathing in the salty air and sitting in salt caves. Both Europe and the Middle East practiced halotherapy. In later centuries, people noticed that miners working in salt caves were surprisingly healthy. They never got respiratory diseases and their skin always looked flawless. In 1839, a doctor and businessman decided to capitalize on his research into the salt caves and opened a health resort in Poland. 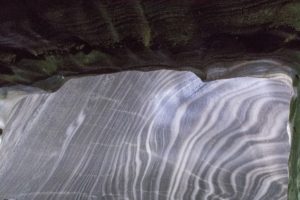 The walls of a salt cave

In the 1960’s, the world’s first underground Allergy Treatment Spa opened in Poland as a result of decades of research and observation of “salted” underground environments. Visitors sought treatment for respiratory conditions and other health problems. The spa became so popular, other salt mines and caves opened to the public throughout Europe and the USSR. In the 1980’s, scientists created the first Halotherapy device, which disperses salt particles into the air. When the Soviet Union fell in 1991, the rest of the world became interested in salt therapy.

Why would you choose salt therapy? Although modern scientific studies have yet to prove all of the health claims, believers say the therapy improves the immune system, allergies, skin conditions, and colds. Salt has been studied with cystic fibrosis patients; inhaling vapor infused with salt helped their breathing. The Senior Scientific Advisor to the American Lung Association, Dr. Edelman, believes that inhaling fine salt particles could be drawing water into the body’s airways. This thins out mucus, which is often the root problem of breathing troubles.

Salt has fourfold powers: it’s antibacterial, antifungal, antiviral, and anti-inflammatory. Ellen Patrick says another benefit can be found in the negative ions in salt counteracting the positive ions from computers, cell phones, and other electronics. People become more balanced.

Salt therapy involves just sitting and breathing in the salty air, but salt yoga has a bit more movement. Following a short meditation, Ellen Patrick will go through chest-opening poses with her class. This improves breathing. After an hour of gentle yoga, the class ends with another meditation. Relaxation and deep breathing is the ultimate goal.

If you’re interested in regular salt therapy minus yoga, you have options. The Williamsburg Salt Spa in Virginia is one of the oldest salt caves in the United States. The founder imports 15 tons of Himalayan and Polish salt to create the environment. In North Carolina, Asheville’s Salt Cave & Salt Spa envelops you in 20 tons of salt rock crystals. In these spa settings, you’ll sit back in a comfortable chair – often a massage chair – and just breathe.

Yoga on its own has lots of health benefits. Click here to read about the how and the why.