If regular museums don’t cut it for you, how about one that’s underwater? There are several underwater museums around the world that offer unique sights of art and wildlife. From shipwrecks to schools of tropical fish, here are seven of the most exciting:

Between Cancun and Isla Mujeres in Mexico, you can find a gorgeous art installation beneath the waves. Jason deCaires Taylor, an artist, collaborated with Mexico’s Environment and Natural Resources Secretariat to create an exhibit that would boost sea life. How? All the sculptures, which include human forms and objects, are made from a special type of concrete. The material encourages coral growth, which has struggled in the area. You don’t need to be a licensed diver to see everything; the 65 sculptures can be found in waters as shallow as 6 feet and deep as 25. Photo credit 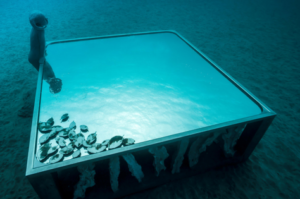 Also designed by Jason deCaires Taylor and made from pH neutral cement sculptures, this underwater exhibit shares the goal of its MUSA inspiration: promote ocean life. It covers 2,500 square meters and includes 300 pieces of dramatic art like the Hybrid Garden, a series of sculptures that are half-cactus and half-human, and The Portal, a mirror that reflects the ocean back at the viewer, like “water within water.” The Portal’s platform includes small compartments that attract small fish, octopus, and sea urchins.

Located in the Black Sea off Crimea, this museum contains 50 sculptures depicting places like the Tower Bridge and the Eiffel Tower. The “Alley of Leaders” is most striking. In 1922 a diver collected sculptures of Communist icons like Lenin, Marx, and Stalin, and intentionally sunk them in the crystal-clear waters. Other divers followed suit, and other busts are always being added.

Known unofficially as “Herod’s Harbor” after its builder, King Herod, this 2006 museum was actually the first of its kind and the result of three decades of excavation. Originally built in 10 B.C., the harbor is now 20-feet underwater. The Israeli-launched museum stretches about 3.5 miles and includes marble columns, giant ship anchors, the sunken ships themselves, and a lighthouse. 2,000 years of history is on display, as Herod’s Harbor was the biggest port in the Roman Empire. 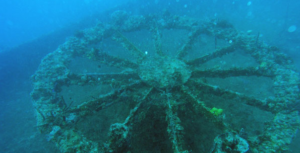 A piece of the WWII ship Thunderbolt

Located in the Florida Keys National Marine Sanctuary, Shipwreck Trail is home to almost a dozen sunken ships. The oldest sunk in 1733 and contained Mexican silver coins and Chinese porcelain. A hurricane wrecked it and it sank. Treasure-hunting divers discovered it in the 1960’s. The youngest ship – the Thunderbolt – never saw duty during WWII. The Navy donated and intentionally it sunk to be part of the museum. The ships are now home to all kinds of ocean life, and both snorkelers and scuba-divers can visit. Photo from website .

Once a thriving Roman city popular among the rich and famous, its inhabitants abandoned their home in the 8th century, leaving it to disappear beneath the ocean. However, you can now visit the ruins underwater. If you can scuba-dive, you’ll be able to swim right up to marble sculptures and mosaic floors. There are parts you can also see with snorkels or from a glass-bottom boat. 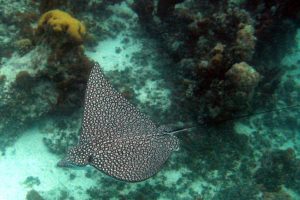 Found in the gorgeous U.S. Virgin Islands, the National Park Underwater trail is home to more than 250 species of tropical fish, as well as reef sharks, Leatherback turtles, and spotted eagle rays. You swim the trail as if you were hiking; it has underwater marker signs to help guide you and informational plaques on the seafloor. Since it is close to the shore, even inexperienced snorkelers can visit.

If you’re a traveler always looking for something off the beaten path, maybe one of these unusual hotspots will get you excited!