At over 1,000 pages in English, the world’s first novel is hardly a quick read. “The Tale of Genji” took one translator 15 years of steady work, which explains why there aren’t that many versions. The Japanese poet and lady-in-waiting Murasaki Shikibu wrote the book. By the time she began writing her story, she had already been married, given birth to a daughter, and lost her husband. In 1005, the Empress at the Imperial court invited Murasaki to be a lady-in-waiting, and it’s most likely because of Murasaki’s existing reputation as a writer. Why does her book matter today? 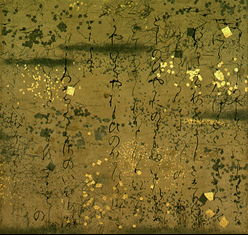 “The Tale of Genji” can be divided in three parts: the hero Genji’s early life and lovers, his struggles, and then the “Uji” chapters, which take place after Genji’s death and explore the lives of his descendants. The plot sounds like a soap opera, as the story includes around 400 characters and dramatic and controversial love stories. From a young age, Genji has always sought out a replacement for the mother he lost when he was young. His father remarries a young woman who resembles his late wife (Genji’s mother), and when Genji gets older, he falls in love with his step-mother. He ends up sneaking into her room and getting her pregnant. Genji engages in other love affairs, until he meets a 10-year old girl named Murasaki who he kidnaps. He raises her into his ideal woman and marries her. 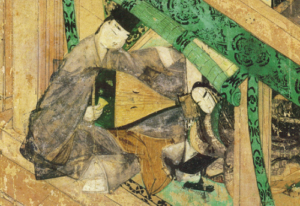 Illustration from Tale of Genji

The Tale of Genji continues, chronicling various events in Genji’s life until Murasaki dies. The chapter “Vanished into the Clouds” is left blank, and scholars believe this is telling the reader that Genji dies. The next part, called the “Uji chapters,” follows the lives of Kaoru and Niou, who is Genji’s grandson. They fight over women, and then the book ends abruptly. Experts aren’t sure if Murasaki intended this to be the ending. Chapters might be missing or she might have just been writing as long as could without any ending in mind.

How Genji was written

You’ll notice that Genji’s kidnap victim and wife shares the author’s name. However, in the Heian era, names didn’t have the meaning they do today. In fact, using a person’s “personal” name was considered improper. Murasaki is a descriptive name and means “violet,” while Shikibu refers to a job. We don’t know Murasaki Shikibu’s “real” name, and she may have been referred to as Murasaki because of her character, and not the other way around.

The Tale of Genji was written in an old court language that just 100 years later was unreadable. The grammar was complex, and character’s conversations were often written in poetry form. Thankfully, people translated it frequently as the Japanese language changed, because the story was so popular. In the early 20th century, a poet translated Genji into modern Japanese for the first time. 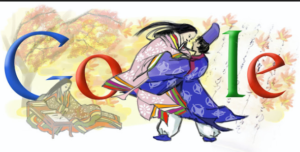 Murasaki and other Heian-era female writers were invaluable to the development of Japanese as a written language. Writing with Chinese letters was considered “masculine,” so it was up to women to advance Japanese. By the 12th century, The tale of Genji was considered a classic and required reading for court poets.

In 2008, Kyoto held a year-long celebration in honor of the Genji’s 1000th anniversary. The first yen note of 2000 honored Murasaki and her book. While it may not be one you’ll read on the beach, it’s hard to not be impressed by its significance. If you’re looking for a movie or TV adaption, however, there are very few. Japan released a 1951 adaption and there’s an anime version from 1987. Given the fact that the leading lady is only 10 years old when the hero meets her, it makes sense that the story would be difficult to translate for modern audiences.