Teams around Major League Baseball get set for an extensive 2018 MLB Season. While many experts have the American League dominating in 2018, for us the National League may be the deeper league with more teams fighting for a chance to play in the World Series.

When we look at the National League we have as many as 10 teams that could be in contention for a post season appearance. At the top of that list we have clubs like the Los Angeles Dodgers who are likely to repeat as National League Champs while clubs like the Chicago Cubs, Washington Nationals, St. Louis Cardinals and San Francisco Giants all have the fire power to take home the honor.

With all that said, here is our National League Preview. 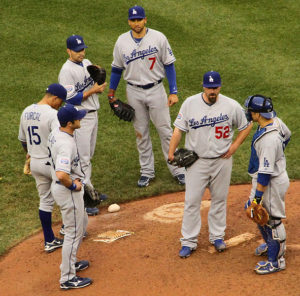 Entering the 2018 MLB Season, the Dodgers continue to be the team to beat in the National League. The Dodgers success begins with their starting rotation led by Clayton Kershaw. Kershaw despite missing some starts, was nearly perfect pitching to a 18-4 overall record in 27 starts. Along with the deep rotation, the Dodgers have a lineup that includes rookie of the year Cody Bellinger.

National League Team to Not Look Past – San Francisco Giants

Yes, by now everyone knows the Dodgers, Cubs and Nationals are the front runners in the National League. But don’t tell the Giants that after a very busy offseason that included bringing in All-Stars Evan Longoria and Andrew McCutchen to round up their lineup. While the Giants offense should see an increase in offensive production, their starting rotation if healthy should be the anchor to their success. While Madison Bumgarner is expected to miss time at the start of the season, if he bounces back, look for the Giants to not only contend for a wild card in the National League West.

Depending on how you look at sleeper picks, you could call teams like the St. Louis Cardinals, Milwaukee Brewers or even the Colorado Rockies, a sleeper. For us, each of those teams have the talent to repeat their success from last year while making a trip to the post season. This opens up the door for us to remind you that the Phillies may be that surprise team that not only contends, but could become a real threat to the Nationals in 2018. The team has talented stars like Maikel Franco, Aaron Altherr and Rhys Hoskins to carry the offensive load while sporting an up and coming rotation led by Aaron Nola. The team was very busy this offseason, adding Carlos Santana to join the offense while adding Jake Arrieta to their rotation, Pat Neshak and Tommy Hunter to their bullpen. Look for the Phillies to contend for a wild card spot in the National League East in 2018. 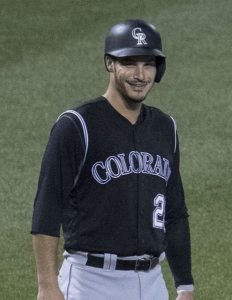 When you look around the National League, the list of MVP candidates is long with a ton of talent that includes former MVP’s Kris Bryant and Bryce Harper. Then there are players like Joey Votto, Paul Goldschmidt and Cody Bellinger making a push to take home the award in 2018. Despite that talent, one player to not look past is Arenado, who may be looked past based on the ball park he plays in, is still one of the best offensive players in the game while delivering gold glove talent at third base. Arenado has the potential to hit 40 plus home runs and 120 plus runs batted in during the 2018 MLB Season.

Despite the reality that Max Scherzer could repeat in 2018 as Cy Young winner, Kershaw has the talent to top 20 wins in 2018 while taking home the award. Add his ability to dominate to the fact he will be pitching for a new contract, Kershaw has more to pitch for in 2018 than any other starter in the National League.

After watching the powerful display from the 2017 rookies of the year, Aaron Judge and Cody Bellinger, the group for 2018 will have a difficult time living up to those offensive numbers. That said, one player to pay attention to in 2018 is Ronald Acuna of the Atlanta Braves. While he will start in the Minors, look for Acuna to make a leap to the big-league ball club after putting together an amazing spring, hitting four home runs to go with a .432 batting average while driving in 11 runs. Acuna has the tools including the power to hit 30 plus home runs, year in and year out for the Braves.

In a division that is loaded with talent at the top with the Dodgers, while also seeing the additions made by both the Giants and the San Diego Padres, any of these teams could take a fall or leap in 2018. For the Diamondbacks after picking up 93 wins in 2017, it will be difficult for them to repeat that success and they possibly could be the weakest team in the division after seeing Yasmany Tomas struggle and Zach Greinke continue to deal with an injury. Despite possibly having the best player in baseball in Paul Goldschmidt, the team may not have the depth to compete with the rest of the division.