How can you tell a car guy or car girl? They are the ones that notice the size of the rear air vents on the new Honda Civics on a morning commute. Car people hear a throaty V-8 start up in the morning and get a tingle down their leg. Car people remember the feel of the steering wheel in their first car. They are a breed apart, those car people, and nothing makes them happier than a good car show. The 2018 New York International Auto Show drew thousands of car people into the Javits Center at 655 W. 34th St, in New York City. Gildshire was there in the person of Lev Radin, photographer extraordinaire. What did he see? We’re so glad you came to your favorite automotive news magazine to find out.

Jaguar I-Pace Electric: Combine the sexy cachet of the Jaguar name with the cool factor of the oncoming wave of electric cars. You’ll see why the line for the I-Pace was long and winding. No crawling e-car this one, because it’s powered by two motors mounted on each axle, (Yes, FOUR motors in all) producing a combined 395hp and 513lb-ft of torque. That translates to 0-60 in 4.5 seconds.

Next-Gen Nissan Altima: The popular Altima made design impacts from its inception. However, that inception was a decade and a half ago. Nissan has been teasing a makeover for a while now. The slick new design signals the direction Nissan is heading in their styling rooms. Color us impressed, but we expected to be. 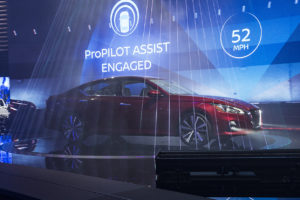 Lexus UX: Slotting below the NX, the new ‘baby’ Lexus has joined a growing list of small luxury crossovers.  This one features a new hybrid powertrain with a combined output of 176hp and all-wheel drive courtesy of an electric motor at the rear axle. 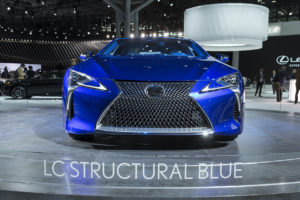 Cadillac CTS V-Sport: Yikes, but this is one hot luxury sedan!  The CT6 V-Sport, the first-ever V-Performance model in Cadillac’s top-of-range sedan class, made its global debut at the 2018 New York International Auto Show.  An all-new 4.2-liter twin turbo V-8 engine estimated at 550 horsepower and 627 lb-ft of torque powers the new model. A mechanical limited-slip rear differential actually increases traction at the limit, which provides more predictable performance on the track or on that mountain road to the beach that calls your name. 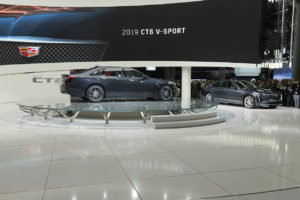 Range Rover SV Coupe: With the introduction of the world’s only full-size luxury two-door SUV, Land Rover is attempting to define a new genre of luxury SUV.  It has a dramatic two-door silhouette and frameless glass doors. The new Range Rover is likely to turn heads, though we were a little surprised to see Range Rover adopt the ubiquitous “floating roof” concept, as that trend is beginning to be played out. Nevertheless, the new model is powered by a 5.0-liter supercharged V8 which takes it from 0-60 mph in 5 seconds and on to a top speed of 165mph.

New Toyota Rav4: Those car people we mentioned earlier were really looking forward to the next-gen Rav4. We found serious styling upgrades along with interior enhancements sure to please loyal Toyota car buyers. Each body panel has a sophisticated twist, combining with the chiseled appearance to make a perfect combination of athleticism and charisma. The stronger nose leads to a more dynamic profile, robust shoulders, and available 19-inch wheels, making for a powerful stance ready to tackle any road at any time. The new XSE hybrid makes this the sportiest utility vehicle on the block while keeping the class in the price range of most buyers. 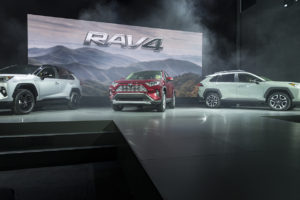 Mercedes AMG GT: The voiceover actor providing the narration to the Mercedes AMG GT is Jon Hamm, who by himself, engenders an atmosphere of cool to this car. However, the car does a pretty good job all by itself. The newest member of the Mercedes-AMG family powered into the Show with three available trim levels. The most powerful version of AMG’s four-door coupe uses the bi-turbo 4.0-liter V8 engine, to the end of producing 630hp. 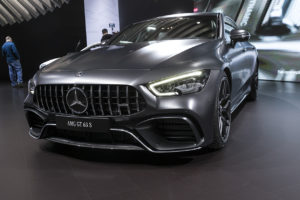 Finally, for the car enthusiast whose answer to “How fast” is “Not fast enough.”

Rimac C_Two: Yes, the underscore is part of the name, but that isn’t all that’s unique about this car. This electric hypercar made its first visit to North America at the 2018 New York International Auto Show. What’s so special?  Just that this stunning sports car offers 1,888 horses. That translates to a top speed of 258 mph. Oh, you just want to go 0-60 as fast as possible? Are 1.85 seconds fast enough? That kind of speed will take your breath, leaving it in the air to pick up on the return trip.

For sure, the 2018 New York International Auto Show was about cars, but there was more to do, as well. What’s better than checking out the new cars and getting your picture taken with IronMan? Take on the thrill of Off-Roading at Camp Jeep. Drag race at the Dodge Challenger Demon Racing Simulator. Maybe you danced with the hamsters at the Kia interactive display. Whatever you chose, a good time was had by all at this year’s New York International Auto Show. If you missed it, make plans now to attend the 2019 gathering. Know that your favorite automotive news magazine will be there.