2020 US Open Finals – The One with the Pandemic

The 2020 US Open will likely be remembered, at least in some part, as ‘The One with the Pandemic’. But then just maybe, the incredible matches and world-class tennis has seen in both the men’s and women’s singles finals will result in this year’s Grand Slam living long in the memory for purely sporting reasons.

We round up the big talking points from the 2020 US Open finals at Flushing Meadows below.

It was the less experienced Zverev who seemed to handle the pressure better early on, storming to a two-set lead. The big-serving German won the two sets 6-2 and 6-4 and looked relatively comfortable going into the 3rd. Thiem though managed to channel every ounce of experience and pain from his last 3 failed Grand Slam final attempts and put in a truly stunning performance to take the next two sets 6-4, 6-3.

The match was as tightly poised as you could ever have hoped to have seen. The two young men would end the match with 25 games won apiece, Thiem would barely edge Zverev 163-159 in total points won, their first and second serve-win percentages never really ventured more than a percentage point or two away from each other and that list just goes on and on.

It is fitting then that the final set came down to a tight tiebreaker which was edged by Thiem 8-6. This gave the Austrian the moment, that he claimed after the match, he has been working for his whole life and was the perfect way to round off a US Open that was crazy in every way from start through to the finish. 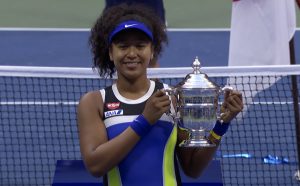 The vastly experienced Azarenka took the first set with relative ease coming through it 6-1. The Belarusians last Grand Slam final came way back in 2013, and it looked like she was drawing on all of her experience throughout. Azarenka had a first service success rate of 86%, and a stunning 100%-win percentage on the second serve, numbers which in a Grand Slam final are only possible with extreme nerve, guile, and experience. The Belarusian used all of her knowhow to break Osaka early and going 2-0 up in the second set.

However, it simply was not to be for Azarenka as Osaka’s class began to shine through and she took 10 of the next 12 games on route to winning the final two sets 6-3, 6-3. This was the Japanese player’s 3rd Grand Slam and 2nd US Open title at the age of just 22.

This year’s US Open finished with a flourish at Flushing Meadows. It is moments like Thiem winning his first Grand Slam title and Osaka powering through to take her third, which makes us feel extremely grateful that sport was able to return so soon. However, it remains a great shame that they took place in empty stadiums and we can only hope that the 2021 US Open will see the return of the passionate American fans.