2020 US Open: The third quarter-final featured Tsvetana Pironkova and Serena Williams, with Williams progressing to the Semi-Finals (Photo: Lev Radin/Gildshire)

The early stages of this year’s US Open were dominated by off-field issues and on-court controversy. It now feels like the quarterfinal stage is finally where we have started to talk about tennis. With some world-class performances, comeback wins, and a few upsets along the way we round up the quarterfinals below.

On the women’s side, 28th seed Jennifer Brady defeated Yulia Putintseva in two sets to reach her first-ever Grand Slam semi-final. The American has been rewarded with a mouth-watering tie against 2018 winner and 4th seed Naomi Osaka.

Osaka progressed to the semi-final courtesy of beating unseeded Shelby Rogers in straight sets in another impressive performance from the Japanese player.

The third quarter-final featured Tsvetana Pironkova and Serena Williams. Porinkova quit tennis in 2017 to start a family and only decided to return after Serena Williams herself convinced the ITF to change its outdated maternity policy. In her first Grand Slam back it was the Bulgarian who got off to a flying start taking the first set 6-4. However, Williams produced her second stunning comeback in under a week. She dominated the next two sets to book her place in the semi-finals.

Williams will now face old friend Victoria Azarenka. The unseeded Belarussian put in a mighty performance to upset reigning champion Elise Mertens. She lost just one game in the process to reach her first Grand Slam semi-final since 2013. 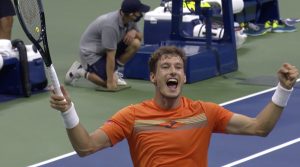 2020 US Open: Pablo Carreño Busta proved that he deserves his spot in the late stages of a Grand Slam by defeating much-fancied youngster Denis Shapovalov. (Photo: Lev Radin/Gildshire)

The 2020 US Open men’s quarterfinals at Flushing Meadows opened with number 5 seed Alexander Zverev beating Borna Coric in 4 sets, to advance to just his second ever Grand Slam semi-final. It wasn’t exactly a routine win for Zverev who lost the first set 6-1 and won two tiebreakers before taking the 4th 6-3. After 12 double faults, Zverev will be looking to sure up the serve before facing Pablo Carreño Busta in the next round.

Pablo Carreño Busta, who took his place in the quarterfinals due to Novak Djokovic defaulting, proved that he deserves his spot in the late stages of a Grand Slam by defeating much-fancied youngster Denis Shapovalov in a 5-set marathon.

In an all-Russian tie, last year’s losing finalist Daniil Medvedev overcame his compatriot Andrey Rublev in straight sets to book his place in this year’s semis against favorite Dominic Thiem.

2nd seed Thiem put in a top-class performance to put away Alex de Minaur in straight sets. He lost a combined total of just 7 games. Thiem, who has lost just one set in the whole tournament so far, faces his toughest test yet when he faces 3rd seed Daniil Medvedev at the semi-final stage.

Both the men and women’s semi-final line-ups are now set. It promises to be as exciting as ever and is not to be missed. We are guaranteed to get a new Grand Slam winner on the men’s side, and some of the players may see it as the chance of a lifetime, whilst the women’s side will see two genuine heavyweights of the game in Azarenka and Williams go toe to toe.

Easy Ways To Keep Your Phone and Computer Safe From Hackers

When is the Best Time to Take Vitamins, and More