2020 US Open: Noami Osaka serving her way into the finals (Photo: Lev Radin/Gildshire)

This year’s semi-final stage at Flushing Meadows has been one of the most tightly contested Grand Slam last-4’s that we have seen in recent years. Out of the 4 singles matches played, 3 of them went all the way to a final set decider. Everything you need to know about the semi-final matches at the 2020 US Open is rounded up below.

Serena Williams had completed two comeback victories in the space of a week to reach the semi-final stage, but the American found herself on the receiving end of a comeback this time around. After winning the first set 6-1 it looked like it may be a routine win for Williams, but unseeded Victoria Azarenka used all of her experience and knowhow to take both the 2nd and 3rd sets 6-3. For Williams, this means the wait goes on for her 24th Grand Slam title that would equal the all-time record.

This will be Azarenka’s first Grand Slam final since 2013, and some will be wondering if the Belarusian has finally found the world-class form she proved she was capable of in the early 2010s. Azarenka will face Naomi Osaka after the Japanese player defeated 28th seed Jennifer Brady in 3-sets.

The 2018 champion Osaka came through a first-set tiebreaker to get off to the perfect start but floundered in the second set as Brady put in a solid performance to take it 6-3. Like a true champion, Osaka shook off this setback to dominate the 3rd and advance to her second US Open final. 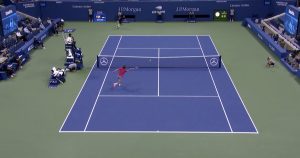 US Open 2020: Dominic Thiem had a routine victory against the 3rd seed Daniil Medvedev, winning the match in straight sets. (Photo: Lev Radin/Gildshire)

The first men’s match was a 5-set thriller between Spaniard Pablo Carreño Busta and German Alexander Zverev. It was 20th seed Carreño Busta who hit the ground running, winning the first two games 6-2, 6-3. The 29-year-old was looking to reach the first Grand Slam final of his career, with this being just his 2nd ever semi-final.

However, it was not to be in the end for the Spaniard as big-serving Alexander Zverev romped through the next 3 sets 6-3, 6-4, 6-3 to complete a truly stunning comeback victory. Zverev, who will now compete in his first-ever Grand Slam final hit a stunning 24 aces against Carreño Busta but also gave up 8 double faults. The German will be looking to improve in his double fault rate when he faces Dominic Thiem in the final.

Thiem had a slightly more routine victory against the 3rd seed Daniil Medvedev, eventually taking the match in straight sets. Thiem, who came into the tournament as 2nd seed, did however have to come through two tiebreakers in the 2nd and 3rd sets but kept his nerve to advance to his 4th Grand Slam final.

The Austrian has lost on all of his previous appearances in finals, but this time round will be seen as a huge favorite to break his duck and go one step further.

After a thrilling couple of days, the 2020 US Open semi-finals are finally brought to a close. This year’s edition had pretty much everything, and with a brand-new winner promised in the men’s singles, and exciting young talent Naomi Osaka facing old-favorite Victoria Azarenka on the women’s side, the finals are promising just as much excitement.

The Best Mid-Back Stretches To Make You a Better You