2020 US Open: World number 1 Novak Djokovic defaulting from the Grand Slam in the 4th round after striking a line judge with a ball. (Photo: Lev Radin/Gildshire)

The men’s side of the tournament has been dominated by one story so far, world number 1 Novak Djokovic defaulting from the Grand Slam in the 4th round after striking a line judge with a ball. If you are yet to see the incident, the Serb sweeps the ball towards the back of the court in what seemed to be an act of frustration, where it strikes the official.

The incident looked completely innocuous and was clearly accidental. Many people call the decision to eject Djokovic from the tournament soft. However, International Tennis Federation rules are clear on this and by the letter of the law, the officials had no other choice.

Spaniard Pablo Carreño Busta was the immediate beneficiary of this decision. He will now participate in just his 3rd Grand Slam quarterfinal against youngster Denis Shapovalov.

Since Rafael Nadal and Roger Federer didn’t enter this year’s tournament due to concerns over Covid-19. A struggling Andy Murray exited in just the second round. This will be the first Grand Slam tournament since 2004 where at least one of the ‘Big Four’ has not made the semi-final.

With the only other Grand Slam-winning entrant Marin Čilić also exiting in the 3rd round, this year’s tournament will see a brand-new Men’s Grand Slam Winner.

The favorite to win is now world number 3 Dominic Thiem, who dispatched Čilić in 4 sets. The Austrian also beat Sumit Nagal and Felix Auger Aliassime in straight sets to reach the quarterfinals. 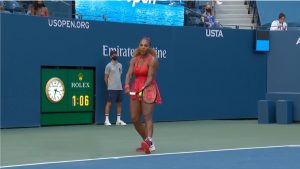 The women’s tournament has been dominated less by controversy and more by world-class tennis. One particular highlight is 6-time former winner Serena Williams’ comeback victory against fellow American Sloane Stephens. After losing the first set 6-2, Williams stormed back to win the next two sets 6-2 to progress through the 3rd round. Williams was also made to work in the 4th round, with world number 21 Maria Sakkari winning a tiebreaker to take the second set, but again progressed. Williams was rewarded with what looks like a favorable quarterfinal tie against Tsvetana Pironkova.

There was an upset in round two where top seed Karolína Plíšková exited in straight sets to 32nd seed Caroline Garcia. Garcia herself got eliminated just one round later against now quarter-finalist Jennifer Brady. Brady will face 23rd seed Yulia Putintseva in what looks like it will be a tightly contested quarterfinal.

2018 winner and 4th seed Naomi Osaka has progressed through to the quarterfinal with relative ease. The Japanese player lost middle sets in both the 1st and 3rd rounds but always looked comfortable and in control. Osaka now faces unseeded world number 95, Shelby Rogers, at the quarterfinal stage.

Do Eggs Cause Acne?

Easy Ways To Keep Your Phone and Computer Safe From Hackers