Home » Our World » A Brief History of Shoelaces

The history of shoelaces is tied directly into the history of shoes. Otzi the Iceman, a frozen mummy, died in 3300 BC and was found wearing bearskin shoes with shoelaces created from lime bark. In 2000 BC, people wore shoes that consisted of leather pieces with leather laces, while the Greeks used rawhide laces. For a while, shoemakers actually stopped making laces and focused on buttons or buckles. This isn’t to say that the shoelace disappeared altogether. The first patent for shoestrings was filed in England in 1790, and soldiers during the American Civil War wore Brogans, with leather laces. 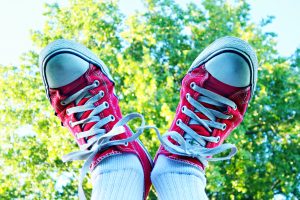 Leather is a problematic material for laces since they don’t do well with water. It wasn’t until the 20th-century that shoemakers started using synthetic materials or weaves. In 1968, Puma opted for an easier method with the first Velcro sneakers. In 1997, Lock Laces patented the first elastic shoelaces.

Did you know that how you lace your shoes can affect how well you move? If your shoelaces are always coming loose or you’re getting blisters, you’re tying your shoes the wrong way. With most running shoes, there are extra holes right at the top. To use them, lace your shoes like you usually do. Then, take one of the laces and run it through the outside of the extra hole on the same side, forming a loop. Do that with the other lace, so you have two loops. Take the hanging laces and cross them through the opposite loops and pull tight. Finish off by tying the laces again, as normal. This system helps prevent blisters on your heel!

Driving Aids Resulting in the Worst Drivers in History