History of Shaving, Plucking, and Waxing: The human body naturally grows hair for warmth and protection. But since ancient times, we have been shaving, plucking, and even burning it off for various reasons. During some years, a lot of hair was acceptable, even political, while other times, being as smooth as a dolphin was the fashion. Women, in particular, have been pulled back and forth when it comes to hair removal. But men and their facial hair have also seen some variations.

While we tend to picture cavemen as covered with hair, they were plucking out their hairs with seashells as far back as 100,000 B.C. before using flint razors. Hair removal was necessary to control lice and mites. During the Ice Age, hair get could get wet and then freeze, which would speed up frostbite and death. By 3,000 B.C., depilatory creams (think ancient Nair) made from starch, arsenic, and quicklime were common among women. In Egypt and India, the first copper razors were being used.

The Egyptians paved the way for modern hair removal and hygiene in a lot of ways. They bathed several times a day, and both sexes saw a bare body as a sign of class and spirituality. They tweezed, shaved, and threaded, which involves twisting a length of thread and tweezing/cutting through the hair. By 60 B.C., they were “sugaring” which was the first form of waxing. The Egyptians and other countries in that region were also the leaders in public hair removal.

The Greeks followed suit in terms of hair removal. Alexander the Great ordered his troops to shave their heads because it meant the enemy couldn’t grab their hair during combat. Back home in Greece, shaving became fashionable, and to remove pubic hair, they would pluck out each separate hair (ouch) or just burn it all off. 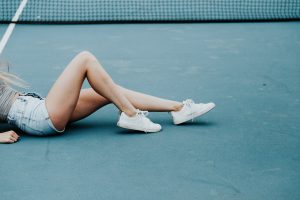 Nothing much changed for hair-removal techniques for the next centuries. In the Middle Ages, Christian clergy would go beardless to separate themselves from Jews and Muslims. While women would tweeze their eyebrows – sometimes completely – to make their foreheads look taller. All of these methods were very painful. It wasn’t until 1880 that the Kampfe brothers patented the first safety razor. The modern razor as we know it wasn’t created until 1906 by King Gillette, whose name soon become synonymous with shaving.

Women were removing their hair, mostly using creams, but they didn’t get their own razor until 1915 when Gillette saw the potential for a new market and released the Milady Decollette. A fashion ad showed a woman lifting her arm, and having a hairless armpit.  As swimsuits became smaller, having bare armpits, legs, and bikini lines became the standard. There were a few years during the 1960s and ‘70s when letting it all grow out became a political statement, but a high number of women were still shaving. By 2000 and the release of a famous “Sex and the City” episode where Carrie gets a Brazilian (waxing the pubic area completely bare), American salons started booking tons of Brazilian appointments.

Hair removal has gone from being a necessary hygienic and safety measure to part of meeting a society’s beauty standards. Women especially have been encouraged to undergo all kinds of uncomfortable procedures in order to be “sexy.” At the end of the day, people should just go allowed to have as much or as little hair as they want.

Happy 4th of July: We Should Never Give Up On The American Dream

Fashion and Beauty Trends Changing in the Post-Pandemic World