That your car’s headlights are important is indisputable. Anyone who has experienced a sudden failure of the headlight system knows terror. That said, headlight technology is a fine line. They need to be bright enough to light the way, but not so bright as to cause excess discomfort for oncoming drivers. This delicate balance has brought about headlights of varying intensity and even varying shades of color within the light itself. The dilemma may be nearing an end, however. New  ADB headlight tech is coming to America after successful trials in Europe and Canada.

Per a study from AAA, they are called Adaptive Driving Beam Smart Headlights and are purported to make night driving safer by illuminating a higher percentage of what is on and near the road. All of this accomplished without blinding oncoming drivers. Smart headlights offer as many lumens of light as traditional headlights with high beams engaged but feature new tech that prevents extra glare.

Consumer Reports chimed in on the possibility of the new headlights coming to our shores.

“Any technology, including ADB that can allow drivers to take advantage of that increase in seeing the distance that high beams provide without causing glare to oncoming or followed, vehicles is a plus for night driving safety,” says Jennifer Stockburger, head of CR’s headlight test program.

This new headlight technology can be a boon to those who regularly drive at night. Gildshire knows that traditional low-beam lights don’t provide sufficient illumination. High beams can help, but 64% of drivers report that they do not regularly use their high beams. Automatic high beams (a recent addition to the options list on new cars) can help, but some drivers complain that the auto-dimmer that is designed to switch off the high beams for an oncoming vehicle is too slow, and the still-burning high beams cast dangerous glare into oncoming windshields. 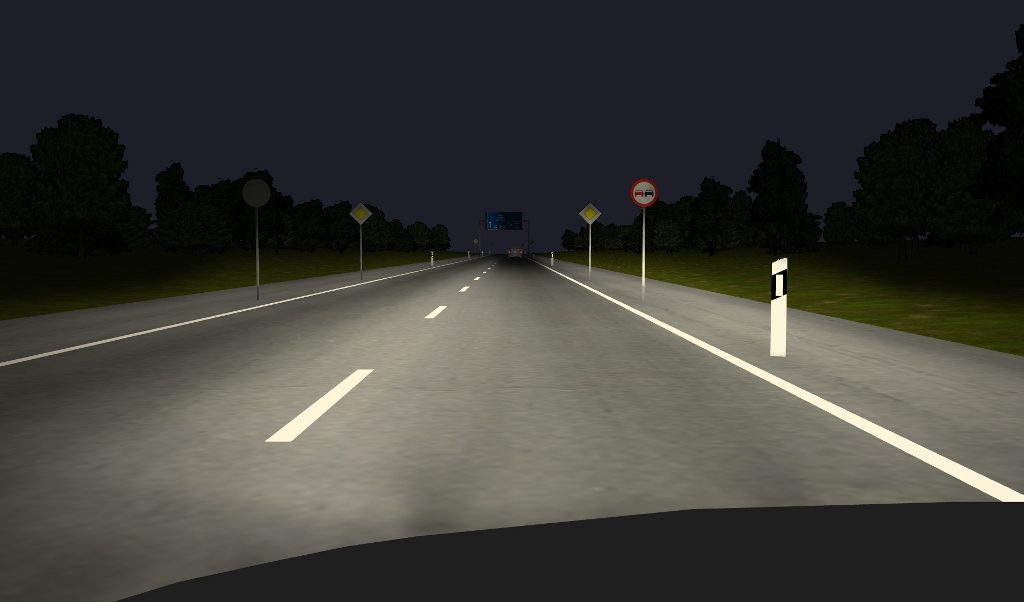 Near daytime lighting without glare. That’s the goal behind ADB tech.

Developers of ADB headlights are handling the glare problem in one of two ways. Some “smart” headlights use actual physical shutters within the headlamp design to shade oncoming cars, much like an umbrella that blocks the sun. Other ADB lights are a collection of multiple LEDs that turn off a few of them when an approaching car is detected.

“Lumens” are fine, but how well do ADB headlights work?

In tests, ADB lights consistently scored higher in illumination than did traditional headlights in the presence of an oncoming vehicle. In fact, the new lights performed as much as 86% better! For oncoming drivers, ADB lights produced about the same glare coefficients as traditional low-beam headlights.

So are they a go for American roads?

First, two issues must be overcome. Allowing the lights in the U.S. would require the National Highway Board to amend the law governing vehicle headlights. Historically, glare has concerned the NHTSA.

Second, for now anyway, the price of ADB lights are daunting. Estimates range from $3,300-$6,400 per set. So, early on, expect only the truly high-end cars to get them.

But, baby steps, as they say. Regulations will be altered, and prices eventually come down. We can see a day when ADB is standard equipment on your new Yaris. We can see these things because our headlights are better than ever.

The Best Tips On Paying Back Student Loans