Amy Sillman’s The Shape of Shape Exhibition at the Museum of Modern Art, New York City

Shape is something that exists everywhere. It defines every outline, form, negative space, and person. A person’s shadow is their personal shape that follows them everywhere they go, attached to both the body and the psyche. In picking out pieces for her exhibition, Amy Sillman pondered about shape in modern art. The Shape of Shape was curated as a part of the Museum of Modern Art’s (MOMA) Artist’s Choice exhibition series and will be on view until April 12th, 2020. 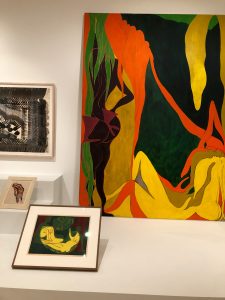 Since 1989, the MOMA has asked an artist to curate an exhibition using the museum’s collection to “select, juxtapose, and comment on.” This series has helped recognize the importance for artists to be able to develop a creative response to their peers and predecessors in a public way. This adds to modern tradition and the evolution of artists through the interpreting and contemplation of various artistic concepts.

Sillman noticed that shape is not a concept largely discussed in art like color is. In wondering why that is, she searched for art pieces where shape does in fact prevail over other considerations. Perhaps shape was left behind when modern art became focused on grids, systems, and calculable things in the 20th century. Perhaps is was too personal, subjective, or indefinite to systematize. Sillman was able to find many pieces that she felt “start with physical perception rather than abstract logic,” as she explains in her artist’s statement.

Many of these pieces Sillman chose to exhibit have a figurative body in them. Those that do not, are reminiscent of some aspect of the body. The shaping of the human body is one like no other, yet many tangible items are based off of its shape. Sillman refers to many of the eccentric and intimate pieces as “bodies that speak, operating at the hub of language and matter, signs and sensations.”

Sillman has much shape in her own work. Though none of her own pieces are included in the exhibition, in looking at Sillman’s website and her own paintings, there is a clear connection in this topic to her personal work. Sillman demonstrates an emphasis of shape in many of her images. Through layering color, image, and shape, her paintings have a quality of life that is captivating. It is clear why she chose many of the pieces for The Shape of Shape exhibition because there is a distinct association of similarity to her own work. 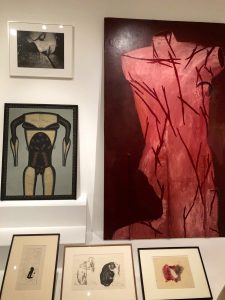 Through searching the museum’s collection, Sillman noticed a trend with the artists who she considers “shape-makers”: they were outliers in modern art. Whether they were not in-sync with their time or simply overlooked, those artists have not gained the same level of traction of other modern art artists. Sillman proposes that shape-makers dealt more with vulnerability and uncertainty compared to the asel-assurance and systematic dependability of others. Regardless of why they are seen as outliers, they deal with real issues and questions that more known modern art artists seem to have ignored. Some of these explorations are marginalization and frailty of the human body, but also the political realities of having a body and what type it is. There is a creation of self and the human body in general in the work of shape-makers that Sillman describes as “a force both new and ancient.

Through this exhibition, Sillman presents esoteric questions that revolve around literal composition and societal contexts of art pieces. The focus on shape is both perception and logic based, but for Sillman, she feels that true emphasis of shape stems is perceptual and personal. Shape speaks to the soul, rather than the brain and has the ability to connect with the viewer.

How to get more things done according to Oprah?