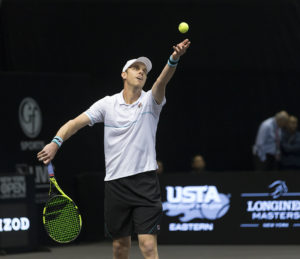 Sunday afternoon, at NYCB Live’s Nassau Coliseum, Kevin Anderson outlasted Sam Querrey in three sets to take home the first-ever ATP 250 New York Open tennis championship. A small, but enthusiastic crowd was on hand to witness what the ATP hopes will become a destination late-winter event on the tour. Gildshire’s Lev Radin was on the scene to provide his signature photographic story in pictures.

The victory marked the young South African’s first winner since Rafael Nadal defeated him in last September’s U.S. Open. In the final, the tie-breaker turned out to be the point in the match where Sam Querrey’s star faded. Anderson ran off to a 6-0 lead with Querrey failing to hold any of his first three serves. Querrey (apparently never taught that a workman never blames his tools) destroyed his racket in frustration.

The 4-6, 6-3, 7-6 score was Anderson’s fourth consecutive three-set match, as his road to the top spot was a grueling one indeed. He bested qualifier Ernesto Escobedo in the first round, and up and comer  Frances Tiafoe in the second round. His semifinal opponent was dangerous Kei Nishikori, returning from a wrist injury in August. In that one, Anderson dominated sets one and two before being pushed in the final stanza. 6-1, 6-3, 7-6 was the final tally. 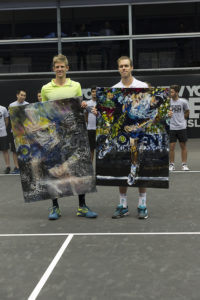 While the scores and champions’ names are of interest, one of the stories of the week was the inaugural event itself. Looking to carve its way into prominence the New York Open got off to a rather slow start.  Many matches happened during the day, meaning during work and school hours. Olympic coverage was also a factor in keeping crowds down. All in all, it is a challenge for a new and relatively unknown tournament to gain traction. This is a city where, as Huey Lewis said, “There’s a half a million things to do, all at a quarter to three.”

Many of the early-round matches drew sparse crowds, with attendances running in the 200 range, if that.  Sunday’s final saw 2,111 people in the stands. While that seems underwhelming at a tournament that was moved to The Big Apple from its former home in Memphis, the organizing party was generally satisfied enough with the tourney turnout.

“For the first year, it was what we expected,” said Josh Ripple, the tournament director. “Already, it’s more than Memphis was for the last 10 years. To think we would get 6,000 people here in the first year is a bad thought process. That is unless you’re going to have Roger Federer or Rafael Nadal.”

Those shooting stars were not present, but the New York Open did offer a striking look at an innovative attraction, namely a black tennis court adorned with white lines. The fashionable new surface made its professional tour debut at the New York Open.  The players expressed approval.

The assembled crowd buzzed about the new surface, but no one there in person complained about visibility or the sightlines. On television, the surface shone like a rain-slick street, making for a quality broadcast event. Just as the New York Open was a first of its kind event, observers believe the black court is another first of its kind that will become more prominent in the future.

After the New York Open, the ATP 250 Tour moved on to another city known as The Big Apple,  Buenos Aries, Argentina. That tournament ran through Feb. 18. Marseilles, France is up next, before the 250 Tour comes back to the United States for the Delray Beach get-together.

The ATP 500 tournament is underway in Rio De Janeiro, as an aftermath to Carnivale. That tour goes next to the United Arab Emirates for the Dubai Duty-Free Tennis Championships.  All ATP tournaments can be streamed live on Tennis TV, through the ATP website. The season, just underway, runs through November.