written by Emmaline Soken-Huberty May 2, 2018

The best online art magazines have their share of infant and children photography, and no photographer is as recognizable as Anne Geddes. Even though her name might not ring a bell, her work showcasing babies dressed as flowers and animals are world-famous and often parodied. What’s her story and how does she capture the spirit of babyhood so well? 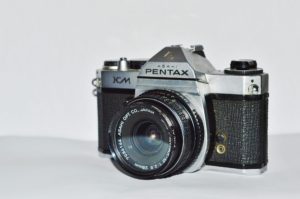 A Pentax camera, the brand Anne Geddes used when she started out

Anne Geddes grew up in Queensland, Australia on a cattle farm. Her childhood wasn’t happy, and she left school at 17 and moved away from home. She met her husband and in 1983, they moved to Hong Kong. Using his camera, Geddes taught herself photography, and when they returned to Australia, the 27-year old continued her work. Three years later, she started working with a local photographer in Melbourne and soon opened her own studio out of her garage. Her private sessions gave her experience photographing people of all ages, and she found herself drawn to babies.

A New Zealand greeting-card company loved her photos of babies, and soon she was hired to create calendars and then books. Her first, Down in the Garden, made it on the New York Times’ Bestseller List. The work featured her now-iconic photos of babies in flower pots and dressed as butterflies. She works with the same stylist and prop-maker over 20 years later.

Anne Geddes’ first belief is that all babies are beautiful. She doesn’t hold “auditions,” but instead keeps in touch with the thousands of parents who send her photos. When it comes time to actually take pictures, Geddes tells parents to not worry about the babies’ clothing. The time of day is important, though; the baby should be fed and happy. Geddes schedules shoots in the mornings with everything already in place. The shoots are quick, because babies don’t have patience. Sometimes her shoots only last 10 minutes. 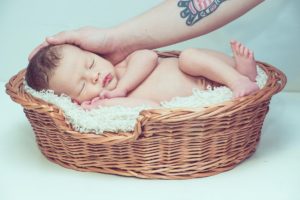 An example of a simple photograph

For baby photography at home, Geddes recommends simple backgrounds and simple lighting. No flash photography. Natural light in the early morning and late afternoon is gorgeous, and taking photos at your child’s eye level. That allows you observe how they see the world. She also isn’t a fan of dressing kids in their best outfits, because that’s not how they appear most of the time. Capturing their spirit in everyday life is more authentic. It’s also important for parents to appear in a lot of photos with their kids, because looking back, the children can see how much they were loved.

Catching up with the Geddes’ babies 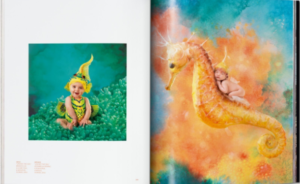 In 2016, Geddes asked for updates on the babies she’d photographed over the years. The subject of her most famous photos of a 2.2-pound baby born prematurely, Maneesha, actually interned for Geddes and is a photographer herself. Other subjects contacted her with new photos, which Geddes put on her Instagram. The young adults are performers, athletes, parents, students, and more.

In addition to her cute nature-inspired photography, Geddes releases books designed to raise awareness about disabilities and diseases, such as meningococcal disease. It’s a devastating illness that can claim lives within 24 hours, and those who survive often suffer from brain damage and learning disabilities. Limbs often have to be amputated. Geddes has also served as an ambassador for March of Dimes and as a Global Advocate for Shot@Life, which brings immunizations to kids in developing countries.

Anne Geddes uses Instagram to connect with her fans. Instagram is now just as good as the best online art magazines out there, so why not use the app to create an amazing travel journal of your own?