Annette Kellerman and the First One Piece Swim Suit


Australian mermaid,  Annette Kellerman, a courageous and outstanding woman, was the first to create and promote the first one piece swim suit for women. By the end of the 19th century Western women were not allowed to swim or in some cultures swimming was just inappropriate behavior for a woman.  Australia was at the time a “swimmers nation” and they would allow men’s swimming suits for women who were participants in swimming competitions. Before Annette Kellerman women would wear a dress and pantaloons as a swimming suit. As you can assume many women found that clothing very uncomfortable for swimming.

When she had to do a swimming performance in front of the Royal Family, Annette Kellerman was asked to wear her swimming suit with black stockings. 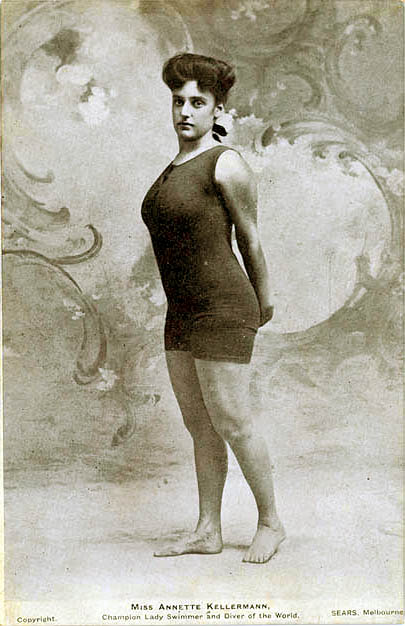 She also performed under the water in New York and that was the start of synchronized swimming. Although, she wasn’t the first one to preform “ballet under the water”, her performance was romantic, sensitive and seductive at the same time.

Annette Kellerman held all the world records in competitive swimming for a long period of time. She even attempted to swim the English Channel and the thought that a woman could do something like that was outrageous for a common 19th century man. After trying to swim across English Channel three times in a row she finally decided to give up from the whole idea.

Annette Kellerman was not just a swimmer; she was a writer, an actress, business woman and a fighter for women’s rights. The “Annette Kellerman”’ swimming suit collection was welcomed and embraced by women all over the world.

This bold woman was also the first Hollywood star from Australia and a pioneer in underwater films. Also nudity in movies was not a problem for Annette Kellerman.

Later in her life she was well known for her passion for health, fitness and relaxation techniques. As a business woman she opened a health food store in San Diego and few spas all over the USA.

This amazing and open minded woman opened so many doors for young women all over the world. She should have more than just a star on Hollywood Boulevard, a woman like Annette deserves to be remembered for more that just creating the first one piece swim suit for women, but also living a dating life full of purpose.

Annette’s remains were scattered in the Great Barrier Reef in Australia.