Apocalypse Now…or Later…or Some Other Time

Little Orphan Annie famously sang, “The sun will come out tomorrow, bet your bottom dollar.” So far, she’s been right 100% of the time. There were those, however, who believed Sat. Sept. 23 was the day Annie’s winning streak would come to an end. Supposedly, the Virgo Constellation was aligned so the sun was over her left shoulder and the moon was at her feet. Jupiter was going to come out from between her legs and we were all going to die. That isn’t us being funny, or making things up. Those, literally, were the events in the sky that were going to bring about the Biblical apocalypse. 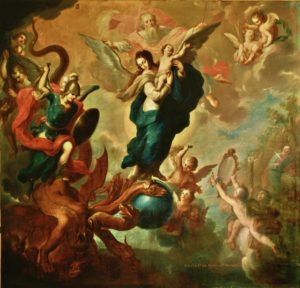 The Apocalypse has been depicted in artwork for centuries.

Of course, that you are reading these words is proof that the prediction was wrong, but some were so sure the end was nigh that they flew to Jerusalem to be part of the action. One would suspect they are currently on a flight home, poorer and wiser.

What makes people behave in this way? Is it a product of the strange times in which we live? Gildshire decided to explore the recent history of the subject.

The first of those two questions may not have an answer, but we can answer the second one. It is not a product of the times in which we live because this kind of stuff has been going on forever. Let’s set the way-back machine to the last couple of generations and see what folks were thinking about the end of the world.

In 1954, Chicago housewife Dorothy Martin claimed to receive a message from the planet Clarion. In the message, Martin heard the world was to end in a great flood before dawn on December 21, 1954. Lucky for them, a flying saucer would rescue the true believers before the Earth was destroyed. Scores of people quit their jobs and left their families, just as in the Sept. 23, 2017, instance. Something good did come out of this occasion, though. The theory of cognitive dissonance (and the book about it by Leonard Festinger) was born, using study from Martin’s followers as source material.

In 1999, followers of Nostradamus believed they had inside end-of-days information. The seer predicted that a king of terror would come from the sky that year. Austrian geologist, Alexander Tollmann, decided to play it safe by sitting it out in a self-built Austrian bunker. Some believe that the full solar eclipse that occurred Aug. 11 in that month may have had a hand in the prediction. Solar eclipses tend to bring out the apocalyptic in people.

The year 2000 (or Y2K) brought about doomsayers. Dire predictions of computer failure and domestic and international chaos coincided with some folks’ belief that round numbers herald catastrophe. Fortunately, at midnight on January 1, 2000, the world celebrated the new year, and no planes dropped out of the sky.

The engines on the Large Hadron Collider started in 2008. The purpose of the LHC is to allow physicists to test the predictions of different theories of particle physics. Worriers, though, believe the energy set free by the collisions will create a black hole capable of consuming the Earth. Of course, no such black hole exists, and several high-profile studies conclude no dangers from the collider.

Some Biblical premillennialists predicted 2011 to be the year for The Rapture, when God’s elect would be caught up into Heaven, leaving non-believers to wrestle with the Earth. Specifically, May 21, 2011, was the date radio host Harold Camping picked for this biggest event ever. Camping arrived at this date through a series of calculations that he claimed were based on Jewish feast days and the lunar calendar. According to media reports, many of his followers quit their jobs and sold their homes (sound familiar?) Some even invested large amounts of money to publicize Camping’s predictions.

Finally, who can forget the kerfuffle created when the Mayan Calendar came to an end? Doomsday prophets ignored the fact that the Mayans eventually would tire of the calendar and move on to other pursuits. Instead, apocalypticians (a word we just now invented) predicted the end of the calendar (Dec. 21, 2012) to be the end of days.

A tricky business, this apocalypse prediction game, isn’t it? You have one chance to be right and a lifetime of explaining to do afterward. Here, though, is something to note. It even has Biblical backing, which should satisfy the most ardent apocalypse enthusiast.

“But of that day and hour no one knows, not even the angels of heaven, nor the Son, but the Father alone.” Matthew 24:36.

So maybe we should spend less energy on predicting the end, and more energy on being good to one another while we’re here. Is that agreeable to everyone?