Why Apple Pie is a Slice of Home: Recipe

Home » Healthy Lifestyle » Why Apple Pie is a Slice of Home: Recipe

‘As American as apple pie’, this saying has been as much a part of holiday traditions as actual apple pie, but many may be surprised to know apple pie did not originate in America. In fact, apple pies or apple tarts were a tradition of early settlers that enjoyed the tasty treat prior to coming to America. However, the early treats were not much like the current day pastry that is often enjoyed.

History of the Apple Pie

Early apple pies were encased in a form of pastry that was not meant to be eaten, only to serve as a vessel for what was inside. This was primarily due to a lack of available, cheap sugar that could make the pastries palatable. As the 16th century rolled around and sugar became a more available option, the modern-day, fully edible apple pie came to life. Early cookbooks share recipes that explain how to make the sweet treat filling and a flaky pastry crust that can be eaten without concern. By the 1700s, the expected latticework type top, or lid, was commonly used by cooks.

Time progressed as did apple pie and by the 1890s the common treat of ‘pie a la mode’ was created during a brief conversation between Professor Charles Townsend and a fellow diner. Townsend often ordered ice cream with his pie following a meal. When asked by a fellow diner what the dish was called, he responded that it was unnamed. The woman immediately dubbed the dish pie a la mode which Townsend loved.

From that day on Townsend asked for the dish by its new name. It is reported that Townsend then visited the famous Delmonico Restaurant and asked for his favorite dish, which they knew nothing about. After shaming the waiter for not knowing of “pie a la mode” and having him call the manager at Cambridge Hotel to learn how to create the treat, Townsend was served. Fortunately for current apple pie lovers, the whole conversation was overheard by a reporter who shared the story the next day via the newspaper. This allowed for this country’s favorite to become a staple in many American homes.

How to Make Apple Pie from Scratch

Many readers will find that this brief history does little more than making them crave a tasty fruit-filled treat. As one who hates to disappoint, this article will end with two variations of apple pie that will melt in your mouth. Take the time to make an apple pie and share with friends during your next get together, consider it an American tradition. 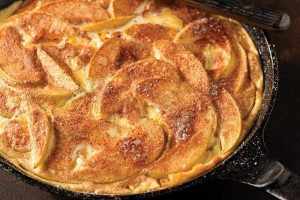 Why Apple Pie is a Slice of Home

Peel, core, and slice or chunk all apples carefully then toss with lemon juice

In a small dish beat on egg white and 1 tsp of water to set aside.

Rub 2 to 3T of flour into the surface of a pastry cloth and rolling pin. Roll out your premade or made from scratch dough into a 15 in a circle on the cloth. Don’t stretch the dough too thin. Press the rolled dough into the pan with about a 1 in overhang.

Brush the bottom and sides of the dough with egg wash. Trim the dough edge back to ¼ in.

Combine the sugar mixture and apples and toss well to coat and then place in the pie pan, adding cold, cubed butter to the top.

Using the same method as before, roll the remaining dough out and place it on top of the apples.

Lightly brush the top with cold water and sprinkle with sugar. Make vents on top by poking the top with a fork after trimming excess dough from the edges. Cover the edges of the pie with aluminum foil and place it in the over with a drip pan below to catch the overflow.

Bake until golden brown, typically 60 – 75 minutes. Remove the foil for the last five minutes of baking. Cool completely before serving.

2 store-bought pie crusts of your choice

Place one pie crust in the bottom of an oven-safe pie pan. Add apples sprinkled with sugar and nutmeg. Top with butter chunks and place top crust over the mixture. Trim excess and poke with a fork for venting. Bake at 375 for an hour. Let cool before enjoying it.

How to Raise Chickens in the Suburbs