April 13-15: Gildshire Goes to the Movies

Hello again, movie lovers of all shapes and sizes. Today, we examine the new releases coming to a theater near you the weekend of April 13-15. April rain showers throughout the western half of the United States will lead to May flowers, but they also lead people inside the warm, dry movie theater. In other words, is it a good time to see a movie? You haven’t read Gildshire Goes to the Movies (or any of the other best online art magazines) often enough if you need to ask that question. Brother man or sister girl it is ALWAYS a good time to see a movie. Grab your bestie and make your way to the Cineplex. Here are your new release choices for April 13-15, along with Rotten Tomatoes scores and Gildshire’s analysis. 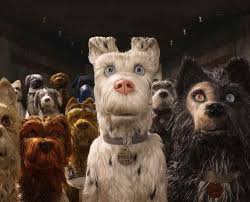 April 13-15 Gildshire Movie of the Fortnight: Isle of Dogs

Isle of Dogs, Rated PG-13 for thematic elements and some violent images. Wes Anderson is a polarizing figure in the movie world. Some love him, while others don’t quite get him. In this foray into stop-motion animation (that’s the old-fashioned kind) Anderson creates a dynamic movie experience. In Anderson’s latest, a boy pilot goes to a canine exile island to find his pet. This is unlike any “cartoon” you have seen in quite some time and earns the title of Gildshire Movie of the Fortnight, a rare honor for an animated movie. It stars the voice talents of Bryan Cranston, Edward Norton, Liev Schreiber, and Bill Murray. Rotten Tomatoes 91, Gildshire 4.4

Rampage, Rated PG-13 for sequences of violence, action and destruction, brief language, and crude gestures (ones, we imagine, involving a middle finger.). Dwayne “The Rock” Johnston left the fight game some time back, embarking on a movie career. Insofar as it has made him a wealthy man, he is a success. Great movies? Well, you might look elsewhere for those. In this outing, Johnston champions his friend, a silverback gorilla, against evil genetic engineers. Tolstoy, it isn’t, but if you are in the mood for unhinged action with clever asides…It costars Naomie Harris, Malin Ackerman, and Jeffrey Dean Morgan. Rotten Tomatoes 49, Gildshire 3.3

Blumhouse’s Truth or Dare, Rated PG-13 for violence and disturbing content, alcohol abuse, some sexuality, language and thematic material. We have all played the game and now it is a movie. In this version of Truth or Dare, the truths are hard to hear and the dares become increasingly grotesque. Or, did you chop off someone’s hand when you played it? No, we didn’t think so. This fright fest stars Lucy Hale, Tyler Posey, Violett Beane, and Hayden Szeto. Rotten Tomatoes 21, Gildshire 1.1

Beirut, Rated R for language, some violence, and a brief nude image. Since his Mad Man days, Jon Hamm’s career has taken him to some pretty interesting places. He was a henchman in Baby Driver while crafting a character as a semi-deranged comedic tax shill for H&R Block. He’s proven adept at everything he does, all the while gorgeous beyond sensibility. Where is the fairness in that?  At any rate, in Beirut, Hamm returns to serious drama as a diplomat sent to the war-torn Middle East to negotiate the return of a friend. Beirut costars Rosamund Pike, Dean Norris, and Shea Whigham. Rotten Tomatoes 77, Gildshire 4.1

Sgt. Stubby, An American Hero, Rated PG for war action and some thematic elements. An animated true story, this movie tells the tale of the most-decorated dog in the history of the world. Eventually promoted to the rank of sergeant (we told you this was a true story) Stubby was a hero in World War I. Call it a feel-good story about a unit and their dog. It stars the voices of Helena Bonham Carter, Gerard Depardieu, Logan Lerman, and Tim Pharr. Rotten Tomatoes 90, Gildshire 4.0.

That’s it for April 13-15, as a solid week of shows awaits your viewing pleasure. Be sure and check back with us in a couple of weeks, as Gildshire Goes to the Movies one more time. Until then, read the best online art magazines, upsize that popcorn and don’t skimp on the butter. It’s a sad bag of corn that doesn’t feel a little slick to the touch. At least, that’s what my cardiologist says.

I wonder if I need a new cardiologist.