April 27-29: Gildshire Goes to the Movies

Good morrow to you, movie fans. This is one of your favorite and best online arts magazines coming back with more movie fun. Search Engine Optimization trackers say we are one of the best online arts magazines, but our friends call us Gildshire, so you will too. Because we’re friends! Movie loving friends are the best kind. They don’t judge if you liked Super Troopers so much that you couldn’t wait for Super Troopers 2. But, they will nod sadly when ST2 turned out to be a dog. Dionne Warwick said it best. That’s what friends are for. Today, we have a full slate of movies with Rotten Tomatoes scores, including a blockbuster to end all blockbusters. (Isn’t this the third one of those in, like, four months?) It’s all good. Movie publicists need jobs, too. Let’s hit it for April 27-29! 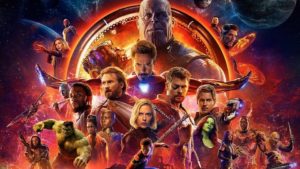 The April 27-29 movie crowds are going to be all Marvel all the time.

Avengers: Infinity War, rated PG-13 for intense sequences of sci-fi violence and action throughout, language and some crude references. Holy, Shneikies, right out of the gate! Whew! That’s exactly the feeling this movie gives fans of the genre. End to end action/adventure that was ten years in the making. It brings together everyone who has ever worn the Marvel mantle and says, “D.C., patootie!” It stars Robert Downey, Jr, Chris Hemsworth, Mark Ruffalo, Chris Evans, and a whole bunch of other people in an epic for the ages, until the next epic for the ages. Marvel fans are lined up for Opening Night as we speak, so they don’t care what we say. Will others enjoy it? We think they might, even if it is Part One, and obviously so. It will make a jillion dollars April 27-29 and only go on from there. Rotten Tomatoes 89, Gildshire 3.9. 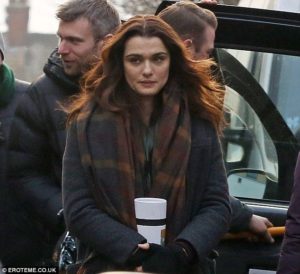 Rachel Weisz, during a filming break for “Disobedience.”

Disobedience, Rated R for some strong sexuality. Wow. Just wow. About as far as you can travel from a Marvel blockbuster is where you will find “Disobedience.” It isn’t sprawling or epic in any way. It is about a village where a young lady returns after being banished by the religious leaders who hold sway there. This little movie explores family, faith, and love in a moving way, earning the title of Gildshire Movie of the Fortnight. It stars Rachel Weisz, Rachel McAdams, Alessandro Nivola, and Cara Hogan. Rotten Tomatoes 88, Gildshire 4.8

Let the Sunshine In (Un Beau Soleil Interieur), Not Rated. The search for meaningful love is both timeless and without national boundary. I daresay, it was the cause of the first ever headache and will be the cause of the last one. In this movie, Juliette Binoche plays a woman unsatisfied with the menu options before her. Who among us hasn’t been there? It is a sweet and moving tale, unhindered by the fact that it is subtitled. It costars Gerard Depardieu, Valeria Bruni Tedeschi, and Nicolas Duvauchelle. Rotten Tomatoes 91, Gildshire 4.0.

Backstabbing For Beginners, Rated R for language throughout, and some violence. The nations of the world came together in Iraq to bring peace and justice to the region. At least, that’s what we have been told. The truth is somewhat messier. This is the true story of some of that mess. It stars Theo James, Jacqueline Bissett, Belcim Bilgin, and Ben Kingsley. Rotten Tomatoes 38, Gildshire 3.6.

The House of Tomorrow, Not Rated. For years, a boy lives with his controlling Nana in a geodesic dome, sheltered from the world. Then, he simultaneously makes a friend and discovers punk rock. No one’s life is ever the same after that! This is the quirkiest movie of the bunch and would be so awarded if we did that kind of thing. It stars Asa Butterfield, Nick Offerman, Ellen Burstyn, and Alex Wolff. Rotten Tomatoes 70, Gildshire 4.0.

That’s all for April 27-29. Be sure and join us in two weeks for another round of movie previews and nonsense. It’s who we are and what we do. Until then, enjoy the movies. If you see Gildshire ahead of you in line, go ahead and act as if you know us. That will move you past the hordes that are on their way in to see Marvel: Infinity Wars.

Health News: Women are Fairer, Excessive Drinking and Being Overweight