Most everyone has heard of Aspen and can associate the place with skiing. Some have even had the privilege of skiing the winter playground simply known as Aspen. Whether you are a beginner or an expert that has travelled the world, you have probably heard of the slopes of Aspen, Colorado. So what makes Aspen the destination of the stars and so commonly known? Read on to find out the history of this skiers paradise.

Aspen sits at the upper end of the Roaring Fork Valley with the Aspen Mountains rising imposingly from the town. Snowmass, Aspen Highlands, and the Buttermilk mountains all lie within 12 miles of town and offer some of the top snowboarding and skiing in the world. The options and great locale make this a playground for those who love to ski or enjoy Colorado at other times during the year. The late 20th century is what truly turned Aspen into the celebrity playground it is now known as to most. When singer John Denver wrote two songs about Aspen the spot became a resting place for the counterculture, especially those into recreational drugs. Over time, the spot also became a go to retreat for executives looking to unwind. The spot remains popular today. 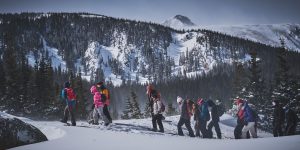 Though Aspen was once a middle class area and small town, this is no longer the case. The majority of middle class families can no longer afford to live in the area. Instead, it is a popular vacation spot, but a living area for those who can afford the best in life. Aspen boasts one of the most expensive real estate prices in the United States. This is a long leap from the small town that was once named Ute City, renamed Aspen in 1880, that was a leading silver mining district. Over the years, as mining declined, the town had to be reinvented as a ski resort town. Beyond skiing in the colder months, Aspen offers activities year round, including the Aspen Music Festival and School, fishing, hiking, and much more. Have you braved the slopes of this famous town or do you hope to some day?