Home » Travel & Nature » Atlantic City: Making the Most of Your Trip

Atlantic City can often feel like an overlooked American destination. It’s partly to do with its location; the East Coast is jam-packed with outstanding places to visit and, if people are traveling from an international destination, they tend to go to New York, Boston, or Washington D.C.

But that doesn’t mean Atlantic City has nothing to offer travelers. It absolutely does. This, after all, is one of the more fun destinations that the U.S. has to offer. So, if you’re thinking of visiting the States in the near future, Atlantic City might just be your destination of choice. In this blog, we’ll run through some key tips that’ll ensure you can get the most from your trip.

As with most destinations, there’s a “good” and “not so good” time to visit Atlantic City. As this is a city that very much deals in fun times, spring or summer is generally considered to be the best time to go. If you can visit between March and August, you’ll be sure to see Atlantic City at its brilliant best. If you can’t handle the heat, then go earlier in spring. Summer temperatures can be pretty high, and there’s the humidity factor, too. However, don’t let that put you off from visiting in July or August; the city does have plenty of awesome beaches, after all.

How to Get There

It’s generally best to travel to one of the bigger nearby airports before continuing your journey to Atlantic City via train. This is especially true if you’re coming from overseas since flights are generally cheaper to Philadelphia, New York, or Washington DC than they are to Atlantic City. The closest major airport is Philadelphia; trains take around 90 minutes from there.

It’s best to stay somewhere near the city’s famous boardwalk. If you do that, then you’ll be close to pretty much everything that you’ll want to see. Be aware, however, that hotels can fill up at the weekends, especially during the summer months. If you have the option, book a hotel for a midweek stay. The city will still very much be full of life, but you’ll avoid the crowds and higher-than-average hotel prices.

If that’s not an option, and all the hotels in the city are at full occupancy, then look at staying slightly outside the central area.

Atlantic City didn’t get its reputation as the “Las Vegas of the East” for nothing. Casino gaming has been legal in the city since the 1970s and, today, you’ll find a host of outstanding casinos that offer table games, slots, and entertainment shows, just like Vegas. Even people who don’t usually visit casinos spend at least some of their time trying their luck against the house. If you’re a newcomer to this world, then get some practice in before you visit; there are plenty of online casino offers that’ll allow you to get familiar with the classic games without spending money. 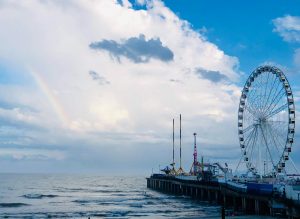 Atlantic Ciity also has a lot of beaches, too, making it the ideal location for travelers that want to combine all-out fun with relaxation.

Atlantic City can feel, from the outside, like a party place. But that only tells some of the story. This city also has a lot of beaches, too, making it the ideal location for travelers that want to combine all-out fun with relaxation. There’s a nice touch to the beaches in Atlantic City: they’re free. This might not sound like a big deal to people from other parts of the world, but it’s notable in New Jersey; most of the other beaches in the state charge for access.

If you’re an adventurous spirit, consider taking surf lessons while you’re there. This part of the state is considered one of America’s premier surf spots.

Once you land, it won’t be long before you understand that Atlantic City has a strong fishing heritage. And that’s good news for people that love to eat well. You’ll find seafood served in most casinos, while there’s even a seafood festival held each year.

What’s on the menu? All the things that seafood lovers enjoy. Shrimp, crab cakes, and lobster tail are all mainstays, while the local special is oysters. You can find plenty of good deals on a dozen of them, so be sure to indulge.

Visiting Atlantic City for more than a few days? Then you may consider visiting one of the destinations within easy reach of the city. One of the most popular day trips from Atlantic City is Cape May, which is located around forty minutes away. It feels very different to Atlantic City, however — this is a town that’s trapped in the 19th century. Quaint, lovely, and a nice break from the mania of the busy metropolis. If you’re looking for another big city to visit, then you’ve always got New York City, Boston, Washington DC, and Philadelphia nearby, too.

Financial Help for Long Term Elder Care – What are the Options?