The car industry is fast-moving. The technology moving us from full-on gas to hybrid to electric moves at a breakneck pace. The makes themselves, though, change slowly and only over time. Yeah, well that was yesterday. According to Motor1, Audi is picking up the pace (to put it mildly.) The German carmaker will announce a new model every three weeks, beginning in January of 2018.

Holy Speed Merchant, Batman! Why would they do this? No one has ever tried this before.

Indeed, no one has. That’s the point, according to Audi. Too often seen as Mercedes little brother or a sibling to the struggling Volkswagen, Audi wants to forge its own identity. Rolling out models like its New York Fashion Week may just do the trick.

So, what kind of new cars can we expect to see? Will they be truly new or mostly derivatives of current models? Gildshire wanted those answers, and here is what we found out.

With Audi Sport already announcing more RS models, there’s a good chance we will see an RS Q5 sometime next year. The all-new Q3 will be unveiled in 2018 as well, and an RS5 Sportback is coming. 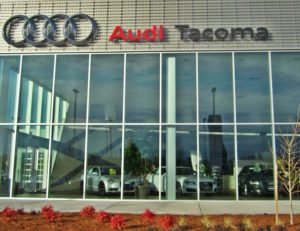 Audi believes dealerships will be hopping!

What else do we believe we know? (Who ever knows anything for sure when it comes to carmakers?) Well, 2018 will be the year when the four-ring logo will launch the next-gen A6, just after introducing the A8 and A7 Sportback. Those two top-tier models could receive the sporty S treatment. We expect that will be the case with the Q2 crossover, since an SQ2 might happen before the year is half gone.

Finally, these are industry insider thoughts about what may happen toward the end of 2018. Expect to see the new SEAT-built (That is an up and coming carmaker out of Spain) A1 to land towards the end of the year. Some sort of an R8 is in the works as well. Likely either an R8 GT or an entry-level variant with a six-cylinder engine.

That’s a lot but it isn’t sixteen. A couple of surprises, perhaps a new rear-wheel-drive Audi sportscar, could complete the aggressive new model assault.

Sixteen new models in one year? That’s unprecedented…and a good way to make Audi stand apart and above their stablemates.