Battle for the Lombardi Trophy: Brady plays down injury concerns amid speculation about his future

Home » Our World » Battle for the Lombardi Trophy: Brady plays down injury concerns amid speculation about his future

The New England Patriots’ iconic quarterback Tom Brady has spoken out to deny claims that he is suffering from an elbow injury and this is bound to affect his team in the battle for the Lombardi Trophy. The speculation soared to new heights following the Patriots’ shock 27-24 loss to the Miami Dolphins that have been considered as “whipping boys” in recent times. Following the defeat to Miami, a post-mortem among fans and pundits alike speculated as to whether Brady was being hampered by an injury, as the team missed out on the chance to be second seed and to have a first-round bye into the Super Bowl playoffs.

One of the main reasons behind the conjecture on a possible elbow injury to Brady was the 42-year-old being seen shaking out his right arm on camera on the sidelines against the Dolphins. Nevertheless, Brady confirmed in a post-game interview that he has “no injuries” and “feels good”, adding that all he wished was that he “would have played better” against Miami to help his team avoid the Wild Card weekend. A matchup with the Tennessee Titans awaited the Patriots following their unexpected defeat in Miami, which could certainly make things a lot tougher for New England’s Super Bowl hopes in 2020. 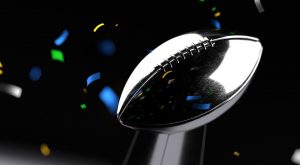 Battle for the Lombardi Trophy: Are we likely to see Brady hold the trophy aloft ever again?

In his post-game discussions, Brady admitted that he and the team did not execute their plans very well against the Dolphins, making “too much unforced errors”. However, it could be argued that Brady had done his bit in the closing stage of the fourth quarter, throwing to James White for a touchdown with four minutes remaining to put the Patriots back in the lead. On the flip side, his second quarter pick-six gave the Dolphins a chance to race into an early 10-0 advantage, so some might say that his fourth quarter heroics only served to make up for his earlier misgivings. In truth, Brady has taken plenty of time to get going in the 2019/20 regular season, with many other quarterbacks grabbing the early season headlines.

Destination “Free Agent” for Brady in 2020

It doesn’t matter how deep the Patriots go in this year’s Super Bowl, speculation regarding Brady’s future will be at fever pitch. Some pundits have predicted that Brady could leave the Patriots at the end of his existing contract and play for another team in the 2020/21 season. Pundit Peter King believes the Los Angeles Chargers would make for an attractive option for Brady, given that he is a Bay Area native and the Chargers are preparing to move into an exciting new home. Even the Miami Dolphins have been mooted as a potential destination, given that Brady enjoys a challenge and proving people wrong.

However, columnist Matt Vautour believes there are only two options for Brady – remain with New England or retire. Vautour feels that the prospect of Brady becoming a free agent is merely a game of cat and mouse, with Brady wanting Belichick and the Krafts to “believe he’d consider leaving”. Vautour insists that Brady would find it far easier to “win again in a system that’s been built around him” as opposed to having to start again “somewhere else at 43”.

Whatever his future holds, Brady has played a magnificent role in boosting the overseas profile of the NFL in the last two decades. His remarkable consistency has seen him play a big role in many Super Bowls. In fact, it will be a shock to the system when the bookmakers don’t list Brady in their NFL prop bets anymore, which are some of the most popular wagering options throughout the football season and the battle for the Lombardi Trophy.

When Brady appeared on the “Greg Hill Show” hours after the defeat to Miami, Brady insisted that his own laser-like focus was on helping the team to “figure out how to win a game” and make the most of their Wild Card opportunity. Their opponents, Tennessee, underlined their potential earlier in the season when they rocked the Patriots 34-10, so Brady and co. need to be on their guard. The Patriots have never made it to the Super Bowl under Belichick as a Wild Card, but they’ll take heart from the Philadelphia Eagles and the successful Giants teams in 2007 and 2011 to believe that it can happen again.

Daniela is based in Brighton in the UK, she has been writing since 2010, utilizing her writing skills and transferring them to business marketing and storytelling. She coaches, consults, speaks and writes.

Does ‘Star Wars: The Rise of Skywalker’ Deserve Venom?