Whales are fascinating creatures. Weighing between 88,200–154,000 pounds on average, and measuring anywhere from 8.5-112 feet, they are awe-inspiring for their sheer mass. Whales have ruled the depths of the sea for thousands of years, only nearing extinction through overzealous hunting and profiteering practices foisted on them by humans. As the future of the whale hangs in the balance, this is a great time to go see a pod of whales in their natural habitat. Indeed, for a unique vacation opportunity, consider a trip to see these amazing animals of the deep. These are Gildshire’s picks for the best whale-watching travel destinations you can find.

The Monterey Sea Canyon begins at Moss Landing, and extends horizontally 95 miles under the Pacific. It reaches depths of 11,800 feet. Water this deep so close to shore draws gray whales as they make their way across the bay. It is not uncommon to see gray whale mothers with their calves swimming through the kelp forest created by the warm water as they work their way back to Alaska. 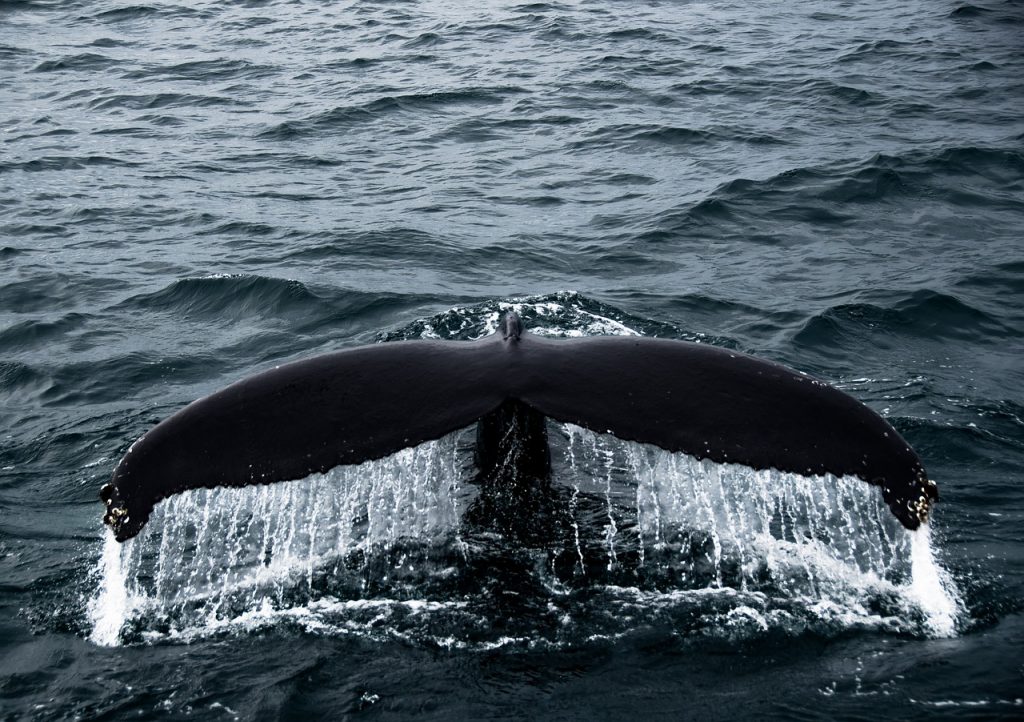 Whale spotted outside Reykjavik, a favorite of our best whale-watching travel destinations. Image by Jules Rufenacht from Pixabay.

Elegant and beautiful whale species swim through the remote seas that surround Iceland. The luckiest whale-watching excursionists will see minke and orcas. The beauty of the mammals, and the chance to see the Aurora Borealis make a trip to Reykjavik memorable for checking off two bucket list entries.

Gray whales give birth here just before making the migration to Alaska for summer feeding. These gray whales are particularly willing to interact with humans, even approaching small fishing boats floating in the San Ignacio Lagoon. The breeding season lasts from December-April and is prime viewing time in one of the best whale-watching destinations.

Between October and May humpback whales visit these tropical waters for breeding purposes. Humpback whales are of particular note for the songs they sing. Humpbacks are personality plus in the whale community, as they slap the water with their tails and hop up and down, breaking in and out of the water.

Pretty much any time of the year is the right time of year to see whales here. Gray whales migrate through the area January-May, peaking in March. Humpbacks follow a similar pattern, while blue and fin whales peak in the summer months. Tens of thousands of birds follow the humpbacks. Choose your whale species of choice and make your way to Newport Beach, one of the best whale-watching sites in North America.

We say it is Seattle, but there is much more to whale-watching in Washington state than the Emerald City. Take a day-long whale-watching trip from Seattle to the surrounding islands, and Deception Pass. Orcas hunt harbor seals and porpoises, while minke and humpback whales hunt salmon in the late spring and early autumn months.

*Late note, re whale-watching in Seattle

Tuesday, May 28, the “Wenatchee” a commuter ferry traveling from Seattle to Bainbridge Island struck a gray whale. The ferry struck the whale about three minutes into the 10-mile trip, and the animal went down into the water, according to multiple reports. The crew, at first, thought the ferry had struck a log, but later saw the whale bleeding near the side of the boat.

The whale broke about five feet from the ferry before it was hit. The Coast Guard was searching for the injured animal. Witnesses reported the whale looked like it could be dying.

Gildshire will keep an eye on the news as it breaks, and report further as developments dictate.*

Those are our ideas for the best whale-watching travel destinations in the world. Plan a trip to see these magnificent creatures of the deep.