New York Fashion Week got underway Sept. 7 and continued through the 13th. All told, dozens of fashion trendsetters mingled with fashionistas and couture leaders in an array of style, grace, beauty and forward-looking clothing design. In a week of fashion wonder, The Blonds stood out for their daring and deft touch with fabric. 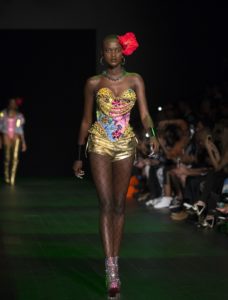 The Blonds style and the star turn by model Teyana Taylor won the day. Taylor was a hit, wearing The Blonds sky-blue, high-cut latex leotard and accompanying biker jacket. The ensemble left the crowd ready to buy what they had already seen and wanting to see more, but Taylor had more moves to show off.

She strutted down the catwalk in precipitously high heeled boots, all the while wearing a crystal-encrusted jacket over a blue latex thong bodysuit that showed off the tats on her muscled behind. The heels weren’t easy, but Taylor still managed a few unexpected dance moves and twirls. The crowd at Skylight Clarkson Studios went berserk.

Who are The Blonds, and how have they made such a mark on the fashion world? The story is an interesting one to Gildshire.

Named for their creative director and designer David and Phillipe Blond, the New York based Blonds are known for garments that celebrate the human form. Their collections appeal to the entertainment industry, largely due to the so-called “rebellious twist” that mark the brand. An eclectic blend of textiles and embroidery make the handcrafted items one of a kind and Number One on the catwalk, at the club, or on stage. 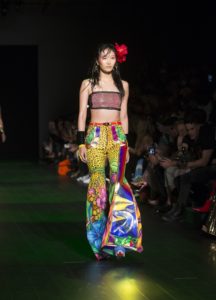 Together, the Blonds credit the vibe of New York City itself for some of the creativity they display. Favorite NYC spots include The West Village and Central Park, but the whole of the city is their muse and inspiration. Little wonder, as The Big Apple has inspired geniuses of stage, screen, literature, and creative arts for three centuries. The Blonds are the latest (Dare we use the term?) geniuses to find their form and balance in this town.

Like so many fashion designers before them, David and Phillipe started out making something here or there for friends and friends of friends. It was the costume designer, stylist and fashion designer Patricia Field who encouraged them to put out a clothing line. That was ten years ago and the rest has been an exciting blend of hard work, inspiration, and history-making design. Now 75 years old, Patricia Fields counts her encouragement of The Blonds as a jewel in her legacy crown.

How in-tune are the designers with entertainment fashion, and how big of a splash have their designs created? They have become known as specialists in over-the-top stage costumes. They’ve outfitted Madonna, Beyoncé, Jennifer Lopez, Miley Cyrus and more. What do those performers have in common (besides talent)? Outrageous costuming, of course. Welcome to the world of The Blonds. 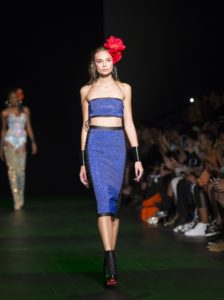 How was this NYCFW show groundbreaking and how did it show off the designers and their continued growth? In several ways, actually.

The Blonds usually stage their shows in a space that’s less than half the size of the studio gallery at Skylight Clarkson. The new setting was an unleashing of growth for David and Philippe Blond.

Another change from the usual vibe of a show put on by The Blonds was thematic in nature. The Blonds tend to work with one or two themes in their shows, but this season’s collection was designed to reflect the core of their inspiration. Think entertainers who have gone beyond famous, to legendary.

A gold bomber jacket paired with matching gold bell bottoms was a throwback to Elvis’ famous gold lamé suit. Another white, floral lace bomber combo recalled the yellow lace suit that Prince wore while performing for the crowd at the 1991 MTV Video Music Awards.
What will come out of this show and appear in an upscale store near you? Expect sequins, flash, and more than a little dash. Mostly, though, expect something daring. It wouldn’t be The Blonds without that.
Upcoming fashion weeks included soirees’ in London, Milan, and Paris, all later this month. Will more fashion news break out of those parties? We’re willing to bet the answer is “yes.”
fashionNew York fashion weekstyle