Bonsai trees are something that most people recognize. Intended to be small, living works of art, theses sculpture-like trees are picture perfect but immensely difficult to take care of. Having been around since the 12the century, the bonsai tradition has grown to be widely recognized all over the world.

Bonsai comes from the Chinese practice of penzai, which means “tray planting,” and is similar in that the practice revolves around planting miniatures trees, plants, and landscapes in an artistic fashion. The Japanese culture adapted it into their own, bonsai practice. The earliest depiction of bonsai was in handscroll paintings from the medieval time the 1800s, bonsai move towards becoming an artistic hobby, opposed to being practiced by a select few specialists. As the popularity of bonsai grew, techniques and tools became more sophisticated, thereby allowing the aesthetics of bonsai shaping to become more intricate and refined. For instance, in 1910, bonsai practitioners began using wire instead of rope and burlap to shape the tree trunks into the intricate designs we have come to know.

Bonsai cultivation and care needs specialized tools and skills to support the growth and long-term maintenance. While they can be grown from nearly any perennial, wood stemmed tree or shrub, some are better than others depending on the bonsai style the cultivator desires. Once the source plant has been planted in permeable soil to allow for adequate drainage, the true maintenance begins. Shallow pots are essential for providing airflow to the fine, fibrous roots of the bonsai. Every one to three years (depending on the age and growth of the tree), each bonsai is taken out of its pot so the roots can be trimmed and some soil replaced. The tree is kept in the same shallow plot to restrict the expansion of roots. Over time, a dense root system develops enabling the plant to absorb water and nutrients efficiently. This dense root system, encourages a thick leaf canopy, which can be pruned to fit the vision of the caretaker.

The leaves must be pruned regularly to maintain balance between the roots and shoots, but beyond that, they can be trimmed to form a certain look. As earlier mentioned, the branches and trunk can be shaped using wire into a variety of forms. Trimming and wiring gives the ability to place the branches and leaves in any shape that the designer wishes. It is even possible to graft a bud, branch, or root to grow within the already sprouted tree by placing the graft under a piece of bark or into a prepared area on the tree. 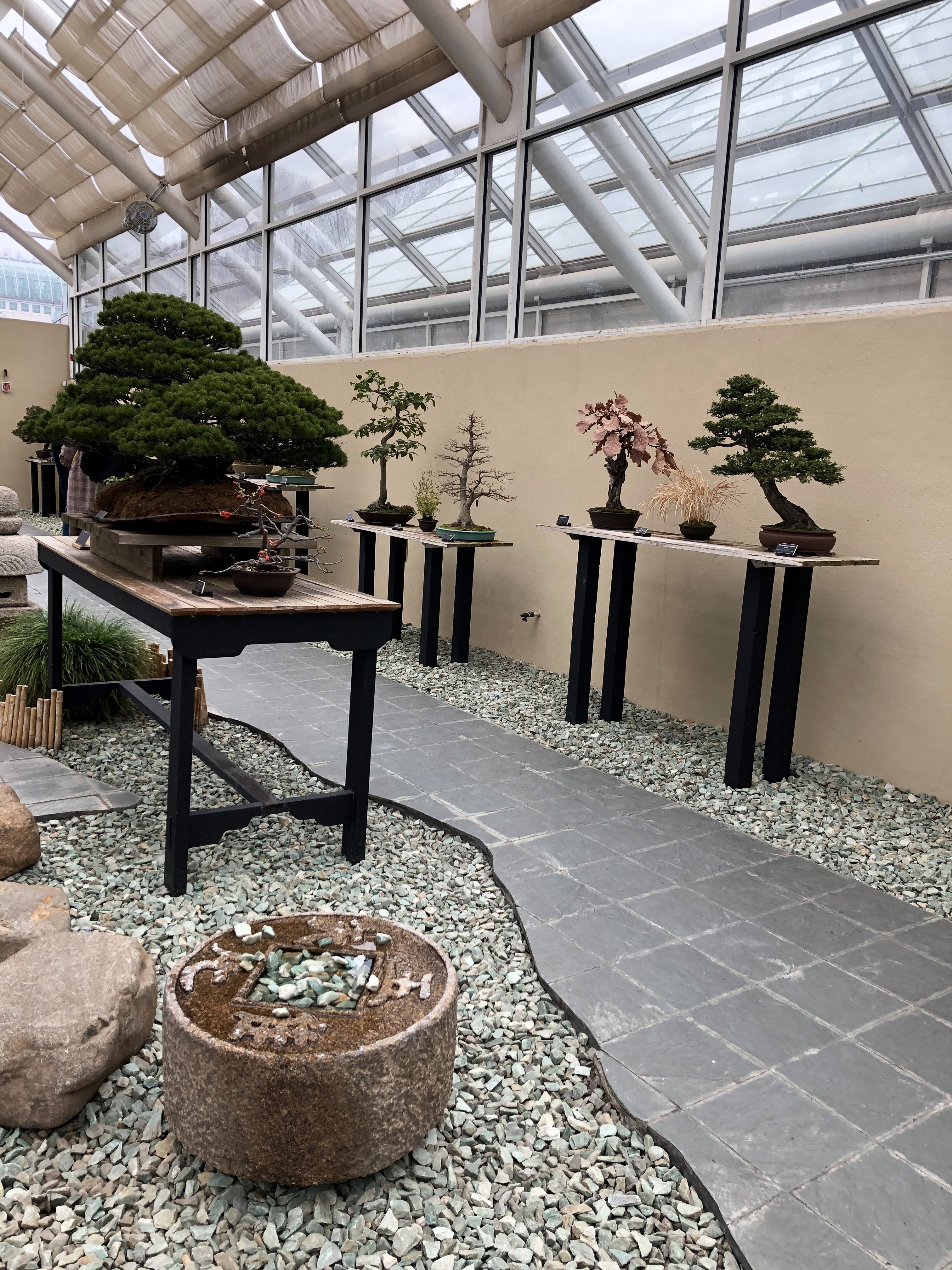 The Brooklyn Botanical Garden in New York has a whole area dedicated to growing bonsai trees and showing them off to the public.

In terms of appearance, there are some specific aesthetics that bonsai trees typically have. These are miniaturization, proportion, asymmetry, organic, and poignancy. Bonsai trees are intended to be mature-looking, as if fully grown, though miniaturized. The proportions should be the same as if the bonsai were a full grown tree so the leaves must be in proportion to the trunk and branches. Asymmetry is prized over radial or bilateral symmetry in branch and root placement. In terms of organic, the tree should look completely natural and untouched by the artist. If a branch is removed to shape the tree, the scar must be covered up. Lastly, poignancy of the tree meaning that the tree should reflect certain Japanese ideals. Many of the formal rules of bonsai help the grower create a tree that expresses Wabi-sabi (the acceptance of imperfection), or portrays an aspect of mono no aware (the awareness of transience).

Furthermore, there are specific names that are commonly used to describe the styles of bonsai trees. The most common styles are formal upright, informal upright, slanting, semi-cascade, cascade, raft, literati, and group/forest. Lesser common styles include windswept, weeping, split-trunk, and driftwood. Each of these style names is based on a descriptor for the tree’s main trunk. There are also trees that are planted on rocks, which creates a whole other type of style for bonsai. Within this realm is root-over-rock (or sekijoju), which when the roots of the tree are wrapped around a rock, entering the soil at the base of the rock. There is also growing-in-a-rock (ishizuke or ishitsuki), which is when the roots of the tree grow in soil contained within the cracks a rock.

A bonsai plant does not have to contain only one trunk. There are styles that include multiple plantings within a single container. They are a forest (several trees of the same species), multi-trunk (all the trunks grow out of one spot with one root system, so the bonsai is actually a single tree with several trunks), and raft (appears to be a tree that has toppled onto its side and branches along the top side of the trunk continue to grow as a group of new trunks).

All of these styles are not mutually exclusive. A bonsai can have characteristics from several of these styles. Traditionally, bonsai trees were plants cultivated in the outdoors, but still in containers. They are plants that require an intense amount of work and dedication to flourish. Ultimately, their care should be focused on maintaining a balance of energy, which takes a lot of energy from the caretaker. They are stunning trees that are truly a piece of art. To see some of these wonderful trees, the Brooklyn Botanical Garden in New York has a whole area dedicated to growing bonsai trees and showing them off to the public.