How A Book For Married Couples Scandalized A Nation 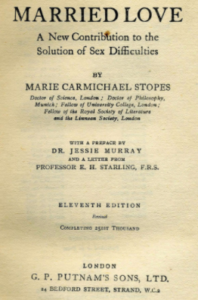 If you watched “Downton Abbey,” you might remember an episode where Mary asks her maid Anna to make a trip to the pharmacy for her. She gives her a book by Marie Stopes. The purpose of the errand? Get birth control. The author of the book revolutionized the relationship between women and sex.

In 1913, Stopes wanted a divorce. She and her husband were sexually incompatible, they fought all the time, and he was frustrated that she was more successful than him, so she went to court. However, the only way to get one was to hand over a doctor’s certificate proving that the marriage hadn’t been consummated. While the marriage was annulled, Stopes wasn’t pleased with her experience and prior ignorance about sex. She had already begun compiling information about sex, its place in different social classes, and more, and decided to publish it. After five years, she’d been turned down by every publisher. Humphrey Verdon Roe, an activist for birth control and Stope’s future husband, helped provide funds.

Married Love came out in 1918. Stope explored how a healthy marriage needed to be about mutual pleasure and respect. Couples should discuss sex and understand one another’s emotional desires. The book shocked Stope’s native England, but people swept it up. In just two weeks, the book was in its sixth printing. Labeled as “obscene,” it was banned in the United States.  Dr. William Jay Robinson published the book privately, and in 1931, a judge overturned the ban. 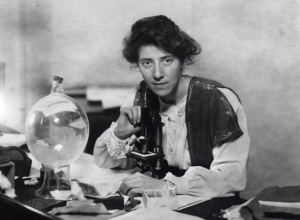 Marie Stopes in her lab

Married Love brought on a wave of lawsuits and fan letters. Women asked about specific birth control methods. To address all the concerns, Stopes published Wise Parenthood, which is most likely the book Mary gives Anna in “Downton Abbey.” She describes a variety of birth control methods and offers her criticisms and advice. In case people wondered about her education, Stopes had earned a PhD in botany back in 1904, and served as the first female academic at the University of Manchester for six years. She knew her stuff.

In the early 1920’s, Stopes began focusing on birth control access for the working class. In 1921, she opened a free family-planning clinic in north London, the first of its kind in England. The clinic eventually moved and began a mail-order birth control service, making it more convenient for people to get what they needed. 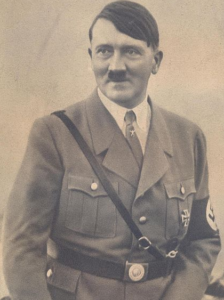 Perhaps the most famous supporter of eugenics – Adolf Hitler

For all her good work, Stope’s beliefs are problematic. She supported the eugenics movement pretty much her whole life, and in Radiant Motherhood, a book released in 1920, she said those “unfit for parenthood” should be sterilized. Who would be considered “unfit?” She lists the “feeble-minded,” “imbeciles,” and “disabled.” When her son married a woman with an eye problem, Stopes cut him out of her will. She also founded The Society for Constructive Birth Control And Racial Progress, which released a birth control device called the “racial brand cervical cap.” Like most in the eugenics movement, Stopes beliefs had a strong racist bent that Marie Stopes International – an NGO that provides abortions and birth control – glosses over.

Stopes would not be happy that Marie Stopes International provides abortions, as she was also vehemently against them. She had nurses at her clinic sign paperwork that promised they wouldn’t provide any information about abortions to patients.

Stopes died in 1958 from breast cancer. She left her clinic to the Eugenics Society.

Could gene-editing be considered a form of eugenics? Read about concerns involving CRISPR and designing genes.