Can effective Gun Control coexist alongside the Second Amendment?

After every mass shooting, we see politicians and the media taking up the rhetoric, pointing fingers and trying to score political points, while a tragedy is unfolding and lives have been lost.

The left is accusing the NRA and pushing for more gun control and the right is diverting and trying to fix the problem.

Topics like mental issues, raising the age to 21 for owning different types of guns, or debating violent video games’ influence on teenagers are becoming hot topics of discussion.

In a previous articles we researched how it is possible that one of the most peaceful European countries has a large number of guns and low levels of gun related violence.

With yet another school shooting that recently took place in Florida, how much longer can the Second Amendment stand when more and more of the population (66% according to a recent poll) favor more restrictions on gun ownership?

“A well-regulated Militia, being necessary to the security of a free State, the right of the people to keep and bear Arms, shall not be infringed.”

What is important to note, is that this amendment was drafted along with the rest of the Bill of Rights, and that there was a consensus at the time that if the federal government could not infringe upon the rights of an individual’s freedom of speech or exercise of religion, then it should not have the power to infringe upon the right to keep and bear arms as well.  All were seen as equally important, as the young nation was just getting its foundations in order and was facing an imminent war (the Revolutionary War) that would require the use of citizens arming themselves.

As the most powerful military in the world today, however, there is not much use in having American citizens arm themselves for an invasion. 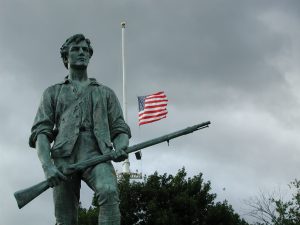 Times have certainly changed, but if history has anything to say, the chances of the Second Amendment being repealed are minuscule at best.

The repeal of an amendment to the Constitution not only requires 2/3rds of both houses of Congress to agree to the repeal but also 3/4ths of all state legislatures as well.  As of this article, the only amendment to have been repealed was the 18th Amendment banning alcohol.  Even then, it barely passed with 38 out of the 48 states at the time (79%) ratifying it.

Hypothetically speaking, let us say for a moment that the Second Amendment is fully repealed and citizens no longer have the right to keep and bear arms.  How would this be enforced?

According to the Congressional Research Service, there are approximately 300 million guns in existence within the United States right now.  That is basically one gun for every individual in the nation.

Even if the Second Amendment were repealed, it wouldn’t make much of a difference with such a staggering amount of guns in existence.  Many if not most Americans who own guns would simply not comply with the repeal and the black market would create even more problems than what the nation is facing today.

With that being said, the only feasible option is to come as close to the boundary of the Second Amendment as one can in regards to gun control.

What is important to keep in mind is the exact wording of the Second Amendment, “the right of the people to keep and bear arms.”

Does this mean that all weapons should be included? Even the late Antonin Scalia, one of the fiercest proponents of interpreting the Constitution as it was written, conceded that it is “not a right to keep and carry any weapon whatsoever in any manner whatsoever and for whatever purpose.”

That conclusion came from one of the most important court cases regarding the Second Amendment, District of Columbia v. Heller.  The 2008 case centered on a handgun ban that the legislature for the District of Columbia had passed in the 1970’s, with the Supreme Court ruling 5-4 against the ban, stating that the Second Amendment is an individual right that is centered on self-defense.

It truly lies on the Supreme Court to determine how close the boundary of gun control can get to the Second Amendment, and until legislation is passed that can be challenged in court, it is simply a waiting game.