Can the Bernie People Love Anyone But Bernie?

Home » Our World » Can the Bernie People Love Anyone But Bernie?

The 2020 General Election for the Presidency of the United States is set. After a crop of 25 hopefuls was winnowed down to just one, a betting favorite from the beginning became the Democrats’ standard-bearer. Former two-term Vice-President Joe Biden will face off against President Trump this November for the title of Leader of the Free World. The current President is embroiled in a fight for his legacy as the nation, and the world, battle the Covid-19 viral pandemic. Meanwhile, Vice-President Biden is struggling with a question in his own Party. After a Primary battle against Sen. Bernie Sanders (I-VT), the Biden camp must ask a hard question. Can the Bernie people love anyone but Bernie? Or, if “love” is off the table, can the Bernie people be persuaded that a Biden Administration is preferable to another four years under President Trump? The course forward hangs in the balance.

“Are the ‘Bernie people,’ those who voted for Sen. Sanders? Or is there a sub-group?”

Hundreds of thousands of people who voted for Sen. Sanders will transition smoothly over into the Biden camp. They are Democrats, first and foremost, who found belief in Sen. Sanders’ populist message of health care as a human right, and forgiveness of crushing student-loan debt. They found a like-minded politician when Bernie spoke of income inequality and illustrated it with the top 1% of the people owning most of the wealth in the United States. These Democratic Party loyalists loved what they heard from Sen. Sanders. But they also believe that Vice-President Biden offers a way forward that, while not as Progressive as Sen. Sanders’ way, is a step in that direction. They also believe in a change in the White House, no matter who the Democratic nominee may be.

“I am guessing, though, that these aren’t the ‘Bernie people.”

That is correct. The Bernie people who must be convinced for Vice-President Biden to win the election are the hard-core Bernie-philes who see the coming election as Bernie or nothing. The Bernie people who make dark accusations that “the Primaries were fixed,” without any evidence that would stand up in court about who fixed them. The folks who found hope in Bernie’s health care initiatives, and decry all others as “Big Pharma.” These are the Bernie people who must be encouraged to vote in November. Because they are the single most numerous at-risk constituency standing between the Democratic Party’s standard-bearer and victory in November. 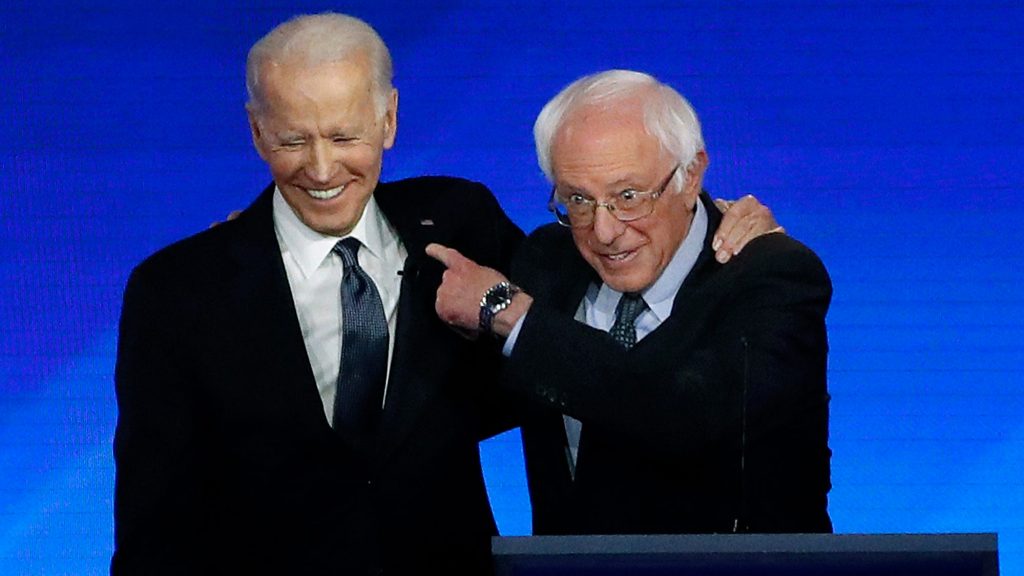 Can the Bernie people hear Bernie when he asks them to vote for Joe?

Look no further back than four years ago. The same battlefield pitched Sen. Sanders against former Sen. Hillary Clinton. A grueling Primary campaign and Sen. Clinton is the nominee. The General Election campaign results in a split decision. The actual vote count favored Clinton, but the Electoral College went in Donald Trump’s favor. In the opinion of most analysts, the deciding factor was the undervote by Democrats, who stayed home in droves. The Bernie people.

“Do you think the same thing could happen this year?”

It certainly could, but there are reasons why it may not. First, Sen. Sanders’ exit from the race was more graceful this time around. Also, his genuine fondness for Vice-President Biden shows through when they speak of each other.

“That should help Vice-President Biden. Can you think of anything else?”

The last four years may move the Bernie people more than anything that Vice-President Biden can say. For sure, there will be some who, for reasons that most of us will never understand, will cling to their Bernie-ness. This, even in the face of their hero supporting Vice-President Biden and personally asking for them to do likewise.

6 Gifts Your Significant Other Will Love