There is a continuing theme in today’s Gildshire news recaps. We could classify them under the banner of “new ways to get a car that doesn’t involve ‘let me check with my manager.” The news is welcomed by Gildshire and anyone who has been worn out by the process of purchasing a car. First up, Carvana. Its innovative style of selling cars is catching on to the point that two new outlets are opening, one in Orlando and another in the D.C. suburb of Gaithersburg, MD. What is Carvana and what do they do? Autoblog helped with the research.

Customers order vehicles online and arrange to have their new car delivered. It can go to their home or office. Alternatively, it can go to one of Carvana’s vending machines. 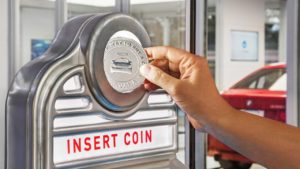 In the latter case, the buyer receives an enormous coin (pictured left) that activates the automated vending machines. The coin in the slot calls the vehicle down from the tower. The mechanism places it on an assembly line-type track that sends it to a delivery bay. The doors to the bay open and the customer takes possession of their new car. They have seven days to drive the car before ultimately deciding if the vehicle is right for them. The first 400 miles are free, but additional test drive mileage is available at $1 per mile.

Phoenix-based Carvana states that their way of doing business saves the consumer $1,500 per car on average. The cars come with a 100-day warranty (a possible sticking point) and the one-week money back guarantee.  However, fewer than 3% of buyers actually bring the cars back.

The two new vending machines bring the company’s total to eleven. Particularly popular in Florida and Texas, seven vending machines are now located in those two states alone. The other already-established vending machines (Isn’t it funny to read that term about buying a car?) are in  San Antonio, Houston, Austin, Dallas, Raleigh, Jacksonville, Tampa, and Charlotte. Carvana began operations in Nashville and still has a successful vending machine there.

So, the next time a car salesman says “dealer markup” show him your oversized Carvana coin and watch the markup disappear.