Many are not aware that Cassius M Coolidge’s ‘Dogs Playing Poker’ is not one, but actually 18 different works. The series comprises of ‘Poker Game’ (1894) and 16 other oil paintings which had been commissioned by Brown & Bigelow for cigar advertisements in the year 1903. One other painting was created for the same series in 1910. While all these paintings show humanised dogs, only 11 of them were about poker-faced pups engaged in a game of poker.

The painting ‘A Friend in Need’ created in 1903 is considered his most popular work. However, unlike other reputed artists, Dogs Playing Poker was never treated as genuine work of art by the community. Rather, people were taken aback when they first saw his works. William Hennessy, the well-known art historian went to the extent of publicly mocking the series in 2002, on the April Fools’ Day. He released a press statement that being the director of Chrysler Museum of Art, Virginia, he was going to officially acquire them for display. Nevertheless, he admitted later that he had always liked the paintings.

With the whiskey glasses, smoke pipes and expressive faces of the dogs, Coolidge’s works have indeed become iconic today. So much so that his first painting ‘Poker Game’ got sold for over $650,000 at an auction held in New York, in 2015.

Cassius M Coolidge – Who was he?

Cassius Marcellus Coolidge who once used to be referred to as the most famous artist in America who had never been heard of, was born in the year 1844, and didn’t have any formal training in art. Regardless, he could create humorous and playfully surreal paintings and started selling many of them to reputed magazines by the time he was 20.

He tried his hand at multiple professions such as newspaper publishing, pharmacy, banking, sign painting etc. but didn’t succeed at any. His true love always remained art, and he developed a name for himself as an illustrator for children’s books that featured funny animals.

As per art historians, it was Coolidge who was responsible for ‘Comic Foregrounds’ found at carnivals where people could stick their heads into a cartoon mural that functioned as a funny photo op. 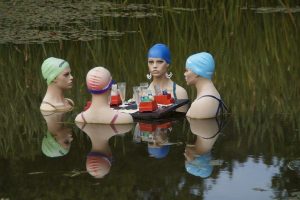 No one knows where Coolidge got inspired to create these poker dogs paintings, but the composition of the image is believed to have been inspired by creations of artists like Paul Cezanne, Georges de La Tour and Micelangelo Merisi da Caravaggio, all of whom have depicted card games with humans, instead of dogs.

It was no less than 10 years after he created the first poker dog painting that Cassius M Coolidge was signed by Brown & Bigelow. He created a 16 part series for them, showing dogs in all kinds of human scenarios, including on a road trip, a football game and more. These were to be originally used for brands, calendars and promotional posters, as cigar advertisements. In fact the calendars proved quite popular everywhere, with Coolidge’s work finding its way into several millions of homes.

Charlotte Hallam is a freelance writer from Manchester (UK).

How to Cure Headaches with Natural Remedies