For a variety of reasons, it isn’t optimal to have an early slot for New York Fashion Week. But, the biggest reason to show late is so that your line doesn’t get lost in a week’s worth of glitz and glamour. That isn’t likely to be a problem for one designer. Christian Siriano’s NYFW runway show kicked off New York Fashion Week with style, pizzaz, timeliness, and not just a bit of drama. Siriano’s Fall/Winter 2020-21 (can you believe we’re already talking about the second year of the decade in fashion?) collection showcased heavy-metal glamour. Siriano started with silks, sequins, and rhinestone dresses, and pivoted to brocades, leathered, and velveted separates. Finally, he presented an array of sculptural gowns hailed as works of art. Gildshire’s Lev Radin was there for the show. 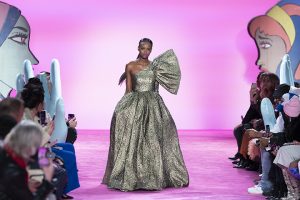 Christian Siriano’s longtime muse, Coca Rocha, fired up the crowd in the second stanza of the first half of the show with a bedecked mini dress. Accompanying the mini was a dominatrix-style collar piece. Next, Candice Huffine showed a shimmering disco dress. Loads of leather, lurex, and metallic fabrics walked the catwalk. Soriano’s fall/winter creations are a predominately evening collection, with lots of super-sized sleeves and ballroom gowns. Who does bustles, nowadays? Christian Siriano’s NYFW show, that’s who! They sent a buzz through the crowd. To offset some of the high-octane drama, ’90s-style suits made a good impression, while leather stilettos took the lead role in the supporting cast of accessories.

We were back to high-fashion drama in the show’s second half. Highly conceptual gowns bearing architectural shapes, highly severe lines, and bedazzled embellishments took over the runway. They were all designed for your next red carpet experience. But, you can also where them for a night on your town. 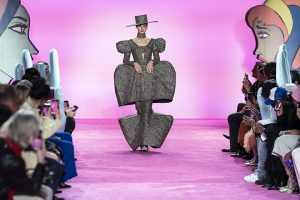 “We all have a little Harley Quinn in us.”

That was Siriano’s message to his models backstage as he turned the show on its ear. Just as the crowd believed the show had provided all of the gasps and surprises that it could, well, along came Harley! And isn’t it empowering to channel our own inner pigtailed superheroine? Christian Siriano’s NYFW show made that connection. It wasn’t so much the clothes as the models’ brightly colored hair. One after another, they emerged with their locks streaked in vibrant blue and pink.

How did the Harley Quinn package come to be at this show?

Come to find out “Birds of Prey,” sponsored Siriano’s show. We should have suspected when we saw large white hand sculptures punctuating the set. In fact, they were shipped in for the occasion.

“There’s this gothic funhouse that was my favorite part of the movie,” Siriano said. “There are these crazy life-size sculptures that I felt were almost like Dadaism, surrealist.”

Christian Siriano is well-known in the high fashion world for his inclusion in sending models down the runway. and this show was no exception. When asked about it after the show, he had this to say:

“A lot of the conceptual looks came from my idea that we all grow in the same greenhouse, so I have a lot of diversity on the runway: men, trans, small, large, everyone.”

Christian Siriano’s NYFW show was one that obliterated the corneas with its wild shapes and bright sequins. But, it wasn’t an early-in-the-week show that was likely to be lost in the shuffle of the rest of New York Fashion Week. That’s a success, all by itself.

How to Have More Friends? Ingredients for Long-Term Friendship