Home » Style & Creativity » The Stories Behind Our Christmas Traditions

The “hurry up and go” of the holiday season can get a little tiresome after a while. It can be hard to hold a smile when you have homemade caramels to wrap, and the missing Jesus to find because the living room Nativity is rather bleak without Him. That’s why today is story time at Uncle Gildshire’s home. Pull up a chair in front of the crackling fire. Here’s a blanket for your legs and a hot chocolate for your tummy. I want to tell you the story behind some Christmas traditions. 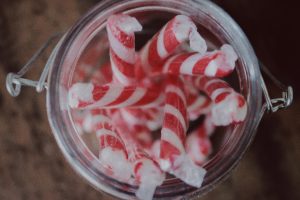 The sweet story behind this sweet treat.

They date from the 1620s. Monschau is a town in western Germany, near the Belgian border. In that small town, there was a church that put on an elaborate Christmas Nativity program. There were Scripture readings, singing, preaching, more readings, and on and on. The church’s choirmaster was concerned about the stamina of the children, so he made small sticks of candy for them. When he made the candy, he formed it into a shepherd’s crook to remind the children about the shepherds who went to see the Christ child. For the first 220 years after its invention, the candy cane was a pure, white, sugar candy without any extra color or flavors. The stripes and mint flavoring date to 1840.

Kissing Under the Mistletoe: 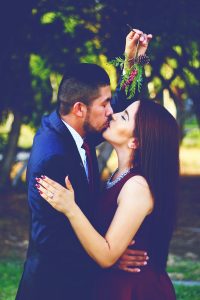 I just happened to be carrying mistletoe, so…

Who hasn’t sidled up beside that special someone just at the right time. “Oops, look up. Oh, well.” Come to find out, mistletoe was a dual-threat. It was purported to have mystical powers that bring good luck and ward off the odd evil spirit that might otherwise possess the household. Secondly, mistletoe was a great predictor of matrimony. If a girl turns down a kiss under the mistletoe from a single man she will not marry in the next 12 months. So, beware of trifling with some Christmas traditions. 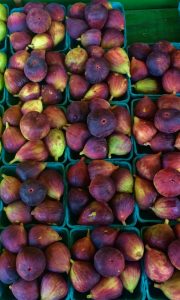 Christmas puddings often contain tasty figs such as these. 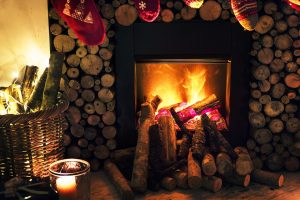 The Yule log is one of the fragrant Christmas traditions.

The ritual burning of a tree hearkens to our Nordic ancestors in medieval times, and when they said “log” they meant a whole tree! The Yule Log was chosen with care and hauled into the home, accompanied by great fanfare. The smaller end was rammed as far as it would go up the chimney. The larger base often stuck out into the hearth or even into the living room! The kind of tree used depends on your country of origin. In England, oak is traditional, while in Scotland, birch is the wood of choice. The French sprinkle a cherrywood log with wine to create a pleasant aroma among the most fragrant of Christmas traditions. 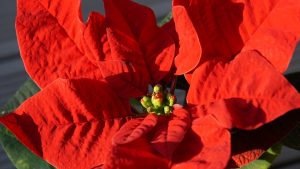 Gorgeous poinsettias are one of the richest Christmas traditions.

The traditional Christmas plant comes from south of the border down Mexico way, and is accompanied by a legend so sweet it will make your teeth hurt. Gildshire would like to close with the telling of this legend.

Pepita was a little girl from Malinalco, Mexico, She was too poor to give Baby Jesus a gift at the Christmas Eve service. As Pepita sadly walked to the little chapel, her cousin Pedro tried to raise her spirits. “Pepita, the smallest gift from someone who loves Him will make Jesus happy.”

Pepita still didn’t know what to offer the Christ child, but she carefully selected a little handful of weeds and formed a tiny bouquet. Still sad about her small gift, Pepita walked up the aisle of the chapel to the altar. Just as she leaned down to place her’s with the shinier gifts, Pepita remembered her cousin’s words and felt a little better. Suddenly, upon contact with the altar, Pepita’s small bouquet of weeds burst into beautiful red flowers. Since that day, the poinsettia flower is the “Flora de Noche Buena,” or “Flower of the Holy Night.”

In the small town of Malinalco, though, the poinsettia is known as “Las Flores de Pepita.” Or “Pepita’s flowers.”

How Dr. Wiley and the Poison Squad Changed The Food Industry