Home » Our World » Climate Change and the “New Hurricane”

First things first. Gildshire Magazines continues heartfelt thoughts and prayers on behalf of everyone on Florida’s Gulf Coast, extending up into the panhandle, Georgia, and South Carolina. Your safety is the single most important thing on our minds as we watch the land and property destruction wrought by Hurricane Irma. At the same time, we have not forgotten those in south Texas and Louisiana who continue to suffer through Harvey’s aftermath. While Irma may be “The Next Big Thing” Harvey’s rage will be felt for a very long time. That said, what is going on? Why are there so many thousand-year weather events happening barely a thousand hours apart? We looked into the climate change statistics to see if we could find answers. We used information gleaned from the National Oceanic and Atmospheric Administration and similar sources. This is what we found out.

So, just how is climate change bringing about bigger and more powerful weather events? What are the hard numbers telling us? 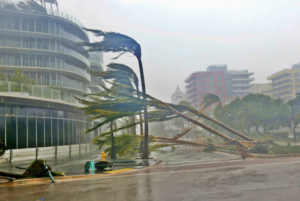 Climate change is creating bigger and stronger hurricanes such as Irma, shown as she burst upon Miami.

Well, the oceans are warming. The NOAA reports that surface temperatures worldwide have gone up about two degrees Fahrenheit. That doesn’t sound like much, but it’s a big deal over that amount of water. The warmer oceans feed more energy into the developing hurricane. Wind speeds, as a result, are higher.

Is that all, or is there more bad oceanic news?

Unfortunately, the bad news continues. Warmer temperatures are carving chunks out of the ice shelves in the Arctic and Antarctic. Melting ice is raising the level of the oceans, but there it isn’t cold enough to cool the ocean. The result is quite startling. We used to worry about wind and rain during a hurricane. Now, with oceans rising, storm surge is the greater concern.

Indeed, it isn’t. The warmer temperatures mean clouds are capable of holding more water. For every two degrees Celsius of atmospheric warming, clouds hold 14% more water. Rainstorms are, literally, wetter now than ever in the planet’s history. Paradoxically,

That all sounds rather ominous.

It is ominous. The onrush of climate change, among other concerns, is what made no less an intellectual giant than Stephen Hawking recently predict that Planet Earth will sustain human life for less than 1,000 years into the future. (Some estimates are about half that.)  Climate change is fouling the nest in which we live, and the strength of Harvey, Irma, and whatever comes next is a testament.

You’re awfully dour for a Monday. Is there a silver lining?

Actually, there is. Recent responsible decisions by the states of California and Massachusetts to try and wean off fossil fuels in the next two decades gives us hope. It isn’t an overstatement to say that the lives of our children and grandchildren are at stake. Everything from drinking water to food supply as soon as 15 years down the road are at stake. Fortunately, most developed countries in the world are seeing what we are seeing here at Gildshire. The decision, in the face of U.S. opposition, by world leaders to double down on the Paris Accord Climate Agreement is another hopeful sign. The very Earth is begging for pain relief and countries from Iceland to New Zealand are feeling her pain.

But, I have friends who say climate change is a hoax. What can I say to them? 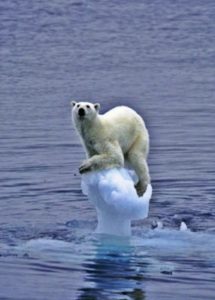 Polar bear in distress in the Arctic

Unfortunately, you may have friends who believe the Earth is flat and the moon landing was faked, but they aren’t everyone and those who believe in science are not growing weary. Some folks will deny climate change until the last polar bear drowns in an iceless sea.

Can I find out more information about this?

Well, you can keep reading Gildshire, for one thing. We have an abiding interest and curiosity about science and the future. Beyond that, international news organizations, such as the BBC, do a good job of reporting climate change pieces.

I need to know more about this!